I have always been fascinated by traditional festivals from around the world so it was a great pleasure to visit the Ukrainian Museum’s Easter Bazaar a few weekends ago in the backstreets of Hindmarsh. The museum was a hive of activity when I arrived at what appeared to be Kiev Central that Sunday morning. Amidst Ukrainian chatter, women in traditionally embroidered cross stitch blouses distributed plates of open sandwiches of herring and salad or ladled bowls of bright purple borsch (beetroot soup).

Irena Boujenko, the President of the Ukrainian Women’s Association enthusiastically gave me a tour of their displays which particularly focus on Ukrainian art and crafts. Many of the handcrafted items – wood carving, ceramics, embroidery and costume (some over 100 years old) – were brought to Adelaide during the two main waves of migration in 1949 and 1992 from this second largest country in Europe.

I was curious to learn what everyone was carrying in plastic bags in baskets or under their arms. The table in the meeting room at the back of the museum was soon laden with these unusually shaped offerings and I discovered that they were the traditional paska, rich sweet Easter bread, decorated with Christian symbols or a rising sun harking back to its pagan origins. More traditional Ukrainian Easter crafts were on display, the results of a recent workshop – embroidered ritual cloths or rushnyky and the world famous decorated Easter eggs or pysanky. Certificates were handed out to all the participants and it is heartening to see how Adelaide’s Ukrainian community are keeping their traditions alive and preserving their history through the museum. I’m certainly looking forward to their About Time History Festival event, a fashion show of traditional costumes and embroidery workshop on Sunday 22 May.

You can see more photos from the Easter Bazaar on here 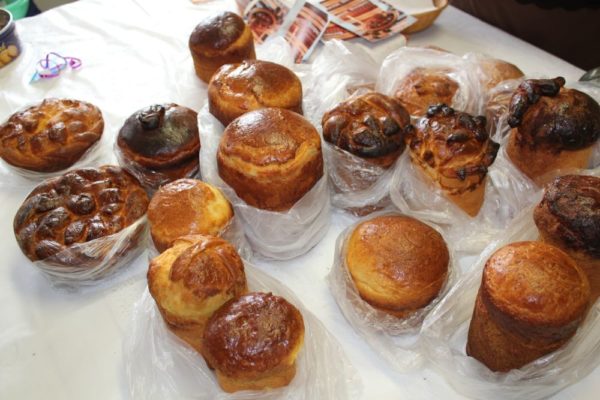