On the last Sunday in September the Barossa Goldfields Historical Society holds their annual open day. Encouraged by their flyer which promised endless Billy tea and damper I set the GPS for Goldfields Road, Cockatoo Valley and hit the road. An hour or so later, a hand written sandwich board on the side of the dirt road along with several parked cars told me I’d come to the right place.

The event was in full swing inside and around Bowden’s cottage, a tiny 1930s two-roomed stone cottage which had been fully restored by Bob Swarbrick and his team from the historical society over a two year period in the early nineties. They also established a small museum in what had originally been an extension to the cottage, with displays relating to the area’s goldmining history including a family bible belonging to Job Harris, the first person to find gold back in 1868.

Welcomed by a mop-capped volunteer beside an equally welcoming log fire, I was happily ushered towards the Billy tea and freshly-made warm damper with homemade jam being served outside on the veranda.

Meanwhile in the orchard, stationary engines were chugging and puffing steam or gushing water into drums, lovinglytended by members of the Gawler Machinery Restorers Club.

On the other side of the gardens, one could try one’s hand at gold panning, watch blacksmith demonstrations or cross sawing. Children were also having fun with a metal detector with help from local ‘Constable’ Frank.

However it’s important to note that fossicking in national parks is not permitted.

It was difficult to believe that this peaceful spot amongst the gum trees was once a burgeoning township witha hotel, school and institute attracting over 4,000 people in the latter part of the 19th century.

Another little known piece of history is that the area was also the site of a WWII US army camp.  Only the foundations of some of the buildings remain but the society has put together an interesting display about it inside the cottage.

It was great to see what the enthusiasm of a small group can do in preserving our heritage.

Next time I’ll have to explore the area further and do one of the Barossa Goldfields heritage walks in the nearby Para Wirra National Park – the signs leading the way are not far from the cottage. More pictures of the day can be seen here. 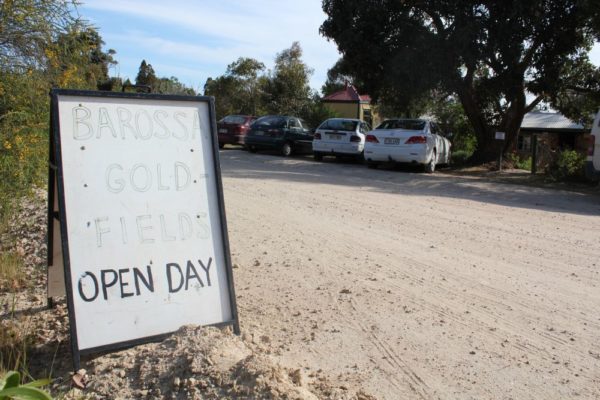