Last week when I drove to the Magill campus of the University of South Australia to attend part of the Narratives of War (NOW) two-day symposium, I wasn’t expecting music.

This biennial seminar program is a showcase for the NOW Group’s research based at UniSA’s School of Communication, International Studies and Languages. Headed by Professor Claire Woods, the group is concerned with the study of aspects of war, peace and reconciliation and brings together academics and research students from many diverse fields.

There were certainly a varied number of participants on the day I attended; from academics of wide-ranging disciplines, journalists and writers, members of local history groups and community museums, amateur family historians,  ex-military, and students.  And also a fascinating range of topics presented relating to the legacies of war such as the concept of shell-shock, the history of medals, art motivated by Hiroshima, the discovery of civilian air raid shelters around Adelaide and war planes at the Australian War Memorial.

However the highlight for me was Dr Russell Fewster’s presentation on his proposed Japanese folk story-inspired film in response to the Australian involvement in WWI in France.  As a former museum curator I am passionate about the use of historic objects to tell emotive stories. Dr Fewster brought along an unusual homemade stringed instrument that had been purchased in Marion but was said to have been ‘made in the trenches’.  It was to be the central focus of his film and for his session he drew upon the musical expertise of local cellist Kim Worley and tenor Robbie Macfarlane to perform two WWI pieces.  With only a few days practice, Kim ably played the strange violin – fashioned out of what appeared to be a table leg but with a crudely-made brass horn to aid amplification.  The slightly scratchy resonance was complemented by Robbie’s smooth rendition as they performed ‘Dinki Di’ followed by the very emotive parlour song of the times “End of a Perfect Day” to a rapt audience.

It would be fascinating to know the origins of Russell’s violin and if there are similar amateur-made examples out there. Has anyone seen anything like this before? 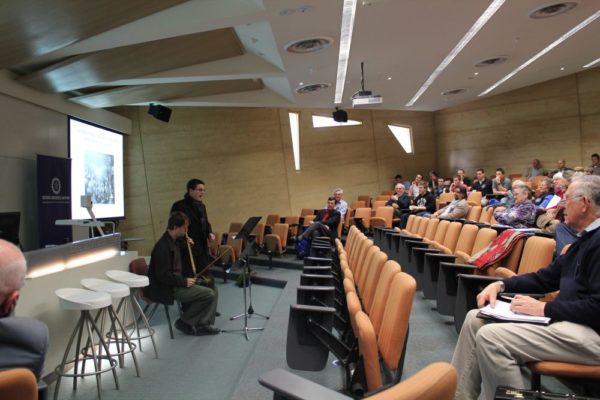