Today was a day to take in some more of the community history around Port Lincoln before heading home this evening.

First up I headed for the local RSL whose salmon pink club rooms have a large and varied collection of war memorabilia on display which include some unique souvenirs such as a small rock from Gallipoli’s Anzac Cove and a piece of a Burma ‘Death’ railway sleeper.

Then it was a dash up the hill to Flinders Park which has a wonderful view of the bay, a prime site for building a home which is just what Captain John Bishop did for his son Joseph in 1866. Built of local limestone, Mill Cottage originally had 2 rooms but was extended as Joseph and his wife’s family grew to 6 children. The cottage is now the home of the Southern Eyre Peninsula Family and Local History Group and proved to be full of interesting treasures: a giant whale bone in the garden, some extraordinary early daguerreotypes of Aboriginal men from the nearby Poonindie Mission dressed as ‘gentlemen’; and ‘Mr Breeze’, a toy monkey dating from 1893 belonging to one of the Bishop children.  It was a delight to be shown round by Rose, Rae and Jackie and witness a group of primary school students trying to fathom out the use of a chamber pot!

Also in this picturesque park is Settlers Cottage although only built in 1987 and housing the Port Lincoln Pioneers and Descendants Club’s collection.  Most intriguing amongst the pioneering memorabilia was a small wooden box with a wind up handle containing the Magneto-Electric Machine for Nervous Diseases. Shocking!

The afternoon was spent at the Port Lincoln Railway Museum, the home of the Eyre Peninsula Railway Preservation Society, where I learnt there is so much more to railway museums than just trains! There were poignant stories of the shunt horses that carted goods to and from the ships, particularly how some sadly drowned when they toppled from the jetty; there were examples of station bikes that were used to take urgent messages to railway workers; the numerous sports clubs arranged by the railway institute; and I loved the controller’s chair on its own set of rails so he could slide up and down the length of his desk whilst working on the railway map.

As always another great day for putting faces to voices and email addresses. It’s been a successful three days of networking and now it’s back to the office to follow up all the questions I’ve been asked and download all my photos! 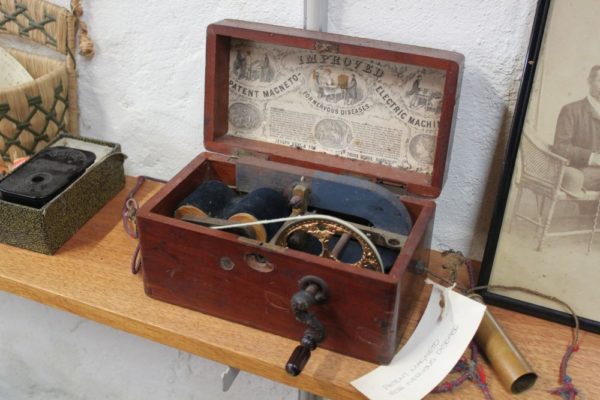