I was looking forward to visiting Swan Reach Museum this week – and not just because you get to take the car across the Murray on the ferry or even because there was the promise of birthday cake to celebrate their 10th anniversary!  This would be my first visit to the museum since joining History SA and I was eager to attend the official launch of their new displays funded by CMP grants over the last couple of years.

I wasn’t disappointed. The ferry ride was fun; the cake delicious and it was terrific to see how a financial boost had taken this organisation to another level as well as how proud the committee and volunteers are of their museum and what they are able to provide for the community.  And a bonus surprise – a 1935 Dodge with original metallic tan paintwork came to the party!

I walked through the new displays with their designer Peter Templeton and Swan Reach museum stalwart Graham Barlow. Both are to be congratulated for the many innovative but simple ideas that have been utilised to counter the constraints of finance and space in the old school building. I was interested to see the use of low-cost digital frames to extend the number of images on exhibition; viewable storage consisting of sliding drawers covered in Perspex containing their collections of eggs and fossils; photos sandwiched between sheets of clear Perspex so that the stone of the original building could be seen behind; even the clever idea of hanging a large museum object (a wheelchair) from the ceiling so that it could still be viewed but not damaged, and did not take up precious floor space.

And it seems that Graham and his team don’t intend to sit back and relax after the official opening of the new displays.  There are more plans afoot to develop the land around the museum and I look forward to seeing the museum go from strength to strength. More photos from the launch are here 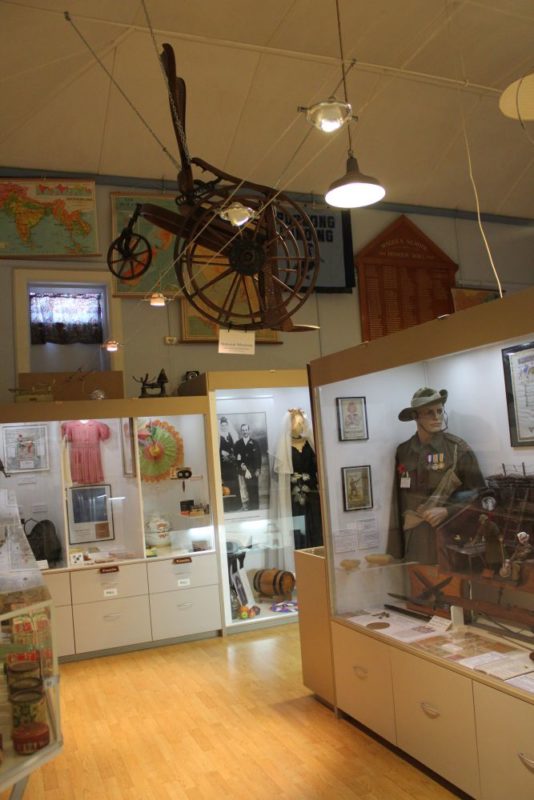