Stansbury Museum’s new Weighbridge display was officially opened on Friday 18 November by Steven Griffiths, Local Member for Goyder before a large gathering of locals and others from further afield within the Yorke Peninsula.

Also in attendance were Martin Hamilton-Smith, Member for Waite and his young son Thomas.  Mr Hamilton Smith’s family has had long association with the town; his grandmother had been the local school teacher while his grandfather was involved in the establishment of Stansbury’s pioneering oyster industry.

The Weighbridge was donated to the museum by Yorketown District Council and is actually identical to the one previously used in Stansbury, at the Wheat Stacks on the cliff top where the Motel presently stands. It was used to weigh grain bags before they were shipped but was phased out of operation as more farmers turned to bulk handling.

Dating from about 1940, the Weighbridge was originally manufactured and fitted by Hawke Engineering Co at Kapunda who installed almost every weighbridge across the Yorke Peninsula.  Hawke Engineering was established in 1857 and made the first weighbridge in Australia as well producing the first Australian-designed hydraulic car hoist.  No longer in existence in Kapunda, the company eventually became Ultra Hawke, the largest manufacturers of weighbridges in Australia and operates from Melbourne.

Mr Griffiths has a special connection with the new exhibit at Stansbury – he grew up in Yorketown and after leaving school had actually operated the weighbridge during his early career with the local council.

After his official speech, Mr Griffiths unlocked the door to the new display shed which contains interpretive panels as well as a set of wool bale scales on which visitors can weigh themselves – although this was perhaps not such a good idea after the delicious and substantial morning tea served by the museum volunteers following the launch!

Stansbury Museum is a registered museum in History SA’s Community Museums Program and is open on Wednesdays and Sundays from 2 pm to 4pm and every day throughout January. More photos from the launch can be seen here 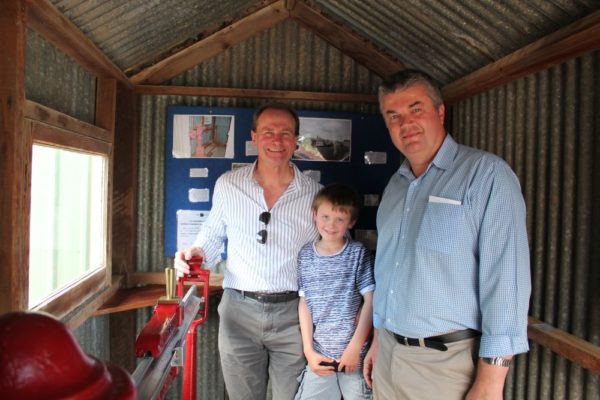