The Heritage Centre’s courtyard is picturesque enough at any time, but especially so at night. The walls of the old courtyard were hung with fairy lights, a Christmas tree stood outside an old police station cell and mock-ups of the Centre’s new signs were hung around the walls.  Also prominent were photographs of volunteers going about their work as were articles and photographs taken from the pages of the Southern Argus. A tribute to the branch’s former patron Nancy Gemmell completed the display.

President David Beaumont spoke briefly of the work of the National Trust in South Australia and of the enjoyment that he and Suzie had in looking through the Heritage Centre and in joining the evening’s celebrations.  CEO Eric Heapy spoke of the work that was underway in restructuring the organisation and the important part branches had to play in the process. He liked the direction the Heritage Centre was taking and appreciated the quality of its displays.

Branch Chairman Trevor Riches expressed his appreciation for the work of all of the volunteers over a very productive twelve months and ended his talk by announcing that the Heritage Centre had just won a Community Museum’s Program grant of $5,178 towards the mounting of a high quality and professionally produced display centered on Strathalbyn’s world-beating Solar Flare.  Trevor told the Southern Argus that the Heritage Centre now houses the Solar Flare and that this solar-assisted recumbent bicycle “won its class in the World Solar Challenge race from Alice Springs to Adelaide in 2001 and then went on to win two further races in the United States in 2002”.  He said that the Heritage Centre was quick to take up the offer of housing the Solar Flare because it recognised the need to preserve the vehicle, to tell the story of its design and construction at the Eastern Fleurieu 7-12 School and to highlight its successes in beating the best the world had to offer.

Trevor went on to say  that an important part of winning the grant was to be able to demonstrate the role of the whole Strathalbyn community in getting behind the venture – in providing advice, encouragement, technical expertise and financial support. And “who can forget the whole town turning out in June 2002 to welcome the team home after their stunning successes in the USA?”  The generosity of a long term Heritage Centre volunteer and of the Strathalbyn Community Arts and Crafts Centre enabled the construction of the Solar Flare’s housing and the purchase of audio-visual equipment – work that was completed earlier this year. Now begins the task of presenting the remarkable story of this important part of Strathalbyn’s heritage. 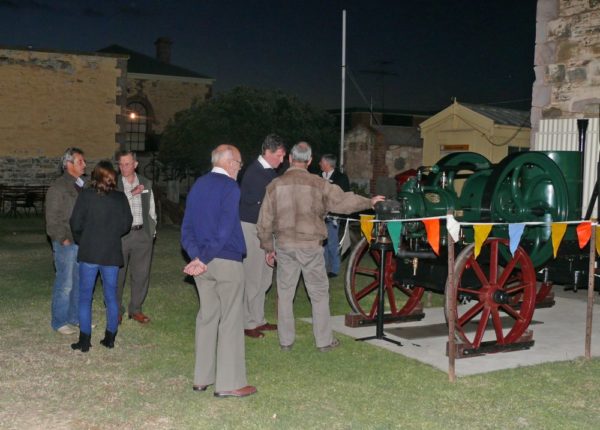