The Sunday before Easter I was invited to a picnic in the Adelaide Botanical Gardens; but not just the usual Aussie BBQ.  This was the annual picnic of the Adelaider Liedertafel 1858, the longest continuing male choir in Australia.  Amounting to 44 members, at full strength, it is also probably the second oldest choir of any type in the country.

Families and friends of these illustrious songsters gathered under the dappled shade of the London plane trees and beside the giant buttressed roots of the Morton Bay figs.  With the smell of bratwurst and the chatter of German voices in the air one felt one had been transported to a park in Stuttgart!

Dressed more informally than when they give public performances such as at the annual Schutzenfest, Christmas concert or other cultural events in Adelaide and beyond, the group enthusiastically entertained the gathering with excerpts from their repertoire, mainly German operatic works and folksongs although some pieces in English also featured.  As usual, songs were performed a cappella (without instrumental accompaniment), almost unique amongst male choirs.

Delving further into their past, I discovered that the ALT have a fascinating history, which can be found on their website http://www.alt1858.org/ along with some historical photos. Antecedent choirs that eventually became the ALT date back to 1844, only 8 years after European settlement in South Australia, but it was in 1858 that a committee established the choir which is why this year is included in their official title. I was fascinated to learn that their first conductor was Carl Linger, the composer of Song of Australia, which in fact they had first performed at White’s Rooms, King William Street on 14 December 1859. He had led another ALT forerunner which had rehearsed in Wiener-Fischer’s café in Rundle Street during the early 1850s, and he continued as conductor until his death in 1862.  The ALT always performs at the Carl Linger Australia Day ceremony at West Terrace Cemetery at the gravesite of their first conductor.

Despite the average age of the choir being around 78, the choir members all seem to have a sense of fun and youthful joie de vivre and it was a delight to share with them a bit of South Australia’s German heritage.

Based at the South Australian German Association (SAADV)’s Clubrooms at 223 Flinders Street, the choir meet every Tuesday evening. 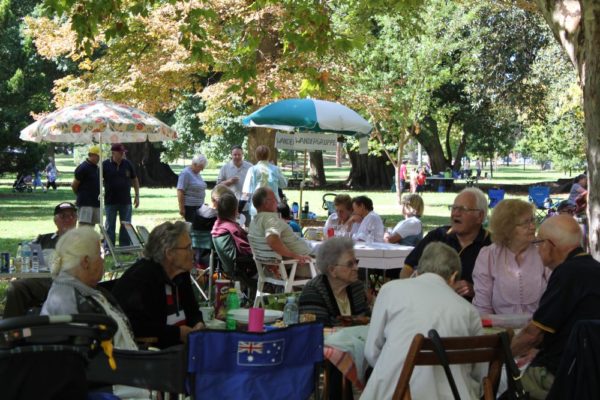