Had I stepped into an episode of ‘Cranford’?  No, I was attending a very special historic birthday party.  We were celebrating Charles Sturt’s 217th birthday on Saturday at his former home in Grange, now the Charles Sturt Memorial Museum, where members of the Victoriana Society certainly brought this early colonial style house in Adelaide’s western suburbs to life.

In the presence of Senator for South Australia, the Hon Don Farrell MP, former SA Premier and the museum’s Patron, the Hon Dean Brown; and Mayor of the City of Charles Sturt, Kirsten Alexander, celebrations began literally with a bang.

Members of the Fort Glanville Historical Association started the proceedings by firing a two pounder cannon, honouring the man who played a key role in mapping the Murray Darling river system and opening up Australia’s inland for settlement. Soldier, farmer, explorer, statesman – Charles’ other legacies include the Sturt Desert Pea, our State’s floral emblem, and samples from his Central expedition are preserved and displayed in the museum.

After the formalities a very pleasant afternoon tea was served in a marquee on the museum lawns. Charles’ annual birthday party on 28 April continues a tradition which began in 1967 when the Jetty Road residence known as The Grange was reopened as a Museum.  Sturt’s mixed farm of nearly 400 acres had been subdivided by the end of the 19th century to create the village of Grange, now a beachside Western suburb of Adelaide. More photos of Saturday’s event can be seen here

The Charles Sturt Memorial Museum is a registered member of History SA’s Community Museums Program.  It is kept open by a dedicated crew of volunteers on the first and third Sunday of the month from 2- 5pm. 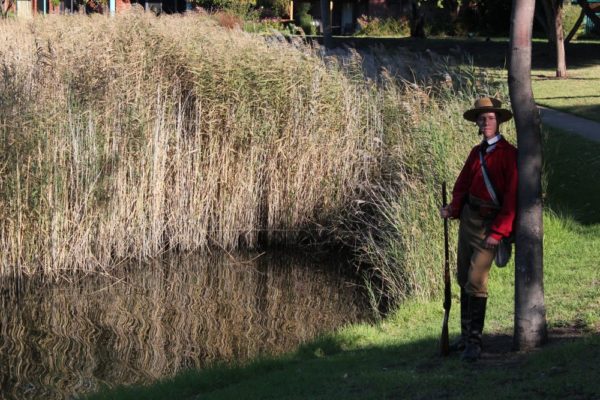