Last Sunday I was involved with helping to send off a large number of classic fifties, sixties and seventies vehicles from the Torrens Parade Ground to the annual Rock and Roll Rendezvous up in the hills at the National Motor Museum.

After an early start, the vehicles began to arrive on the expanse of grey tarmac, broken up by swirling autumn leaves, beneath an equally grey sky. Fortunately, the rain clouds desisted and we were soon toe tapping to the R&R music from the PA system, (conveniently drowning out the sound of the Oval being demolished in the background), tucking into breakfast and buying raffle tickets from event sponsors Coast FM.

Such an event isn’t the success that it is without the help of enthusiastic volunteers such as the CFS who were on parking duty and members of the Vietnam Veterans Association who were putting on the BBQ breakfast. Great job and much appreciated.

It was a real nostalgia fest of FJs, MGs, VWs, V8s and much much more, all polished paintwork and gleaming chrome, while many of the drivers and passengers had taken the trouble to dress in some very innovative retro costumes.

Enthusiastic rev heads huddled over engine bays and engaged in technical talk.  But it was the social history of the vehicles that caught my attention – for example, Steve Annear’s white Ford Galaxie convertible which had been used to ferry the Beatles around Adelaide on their 1964 visit.  It can be seen in the You Tube clip here.  Imported brand new from Canada, it had been previously owned by entrepreneur Sammi Lee who it is said drove Frank Sinatra around in it during his Australia tour.  The car was later owned by sixties and seventies Sydney disc jockey Ward Austin and still has his personalised WA number plates.  It was the envy of many but as Steve commented, all the cars gathered there were unique, with a special history of their own.

With the raffle winner announced, the cars were waved off with Coast FM flags with much panache and directed to where the real fun was to begin up in Birdwood with live entertainment from legendary Little Pattie and many more motoring memories. If only cars could talk!

See more photographs from the breakfast send off here 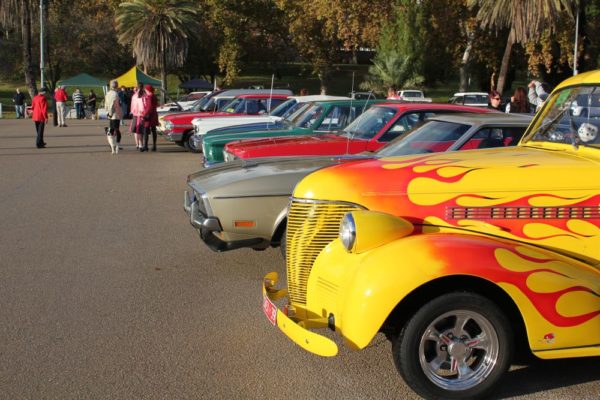