This public recognition of both the founder of Thomas Hardy & Sons and the State Heritage listed building which had been the company’s bottling and wine production plant for 90 years from 1893 to 1983 was organised by Thebarton Historical Society and funded by the Primary Industries and Regions SA.

Speeches took place in the front reception area of the school beneath the castellated tower that had once held the wine company’s blending tanks.

Thebarton Historical Society’s president Kevin Kaeding who had instigated the project, was Master of Ceremonies and Temple College’s principal Marcel Rijken began the official proceedings. There were speeches by Councillor Sandy Wilkinson, North Ward on behalf of the Lord Mayor of Adelaide, City of Onkaparinga Mayor Lorraine Rosenberg, City of West Torrens Councillor Toni Polito and City of Charles Sturt Mayor Kirsten Alexander. Vice President of Thebarton Historical Society and former City of West Torrens Councillor David Crossing also spoke. Thomas K Hardy also reminisced about his days working in the company during the 1960s when he was known as ‘Young Tom’.  His mother, pioneer of the Australian conservation movement, Barbara Hardy and his uncle David Hardy were also in attendance.

The event continued at the nearby Thebarton Theatre where an official toast honouring the late pioneer and father of the South Australia’s wine industry was given.

The imposing 2 storey red brick building on the corner of Henley Beach Road and James Congdon Drive still bears the words ‘Thomas Hardy & Sons Ltd’ and ‘Adelaide Wine Cellars’ along the top edge of the facade.  Designed by architect William Anderson, it was built on a 1.21 acre block in 1893 by James King & Son at a cost of £2,850. During its heyday, the building stored nearly 300 wooden vats and casks containing a million litres of wine. The complex also once had stables and a six roomed manager’s cottage.

In 1983 Thomas Hardy & Sons relocated to the historic wine-growing suburb of Reynella and Temple College purchased the building and began its first school term in 1984.

More photos from the event can be found here 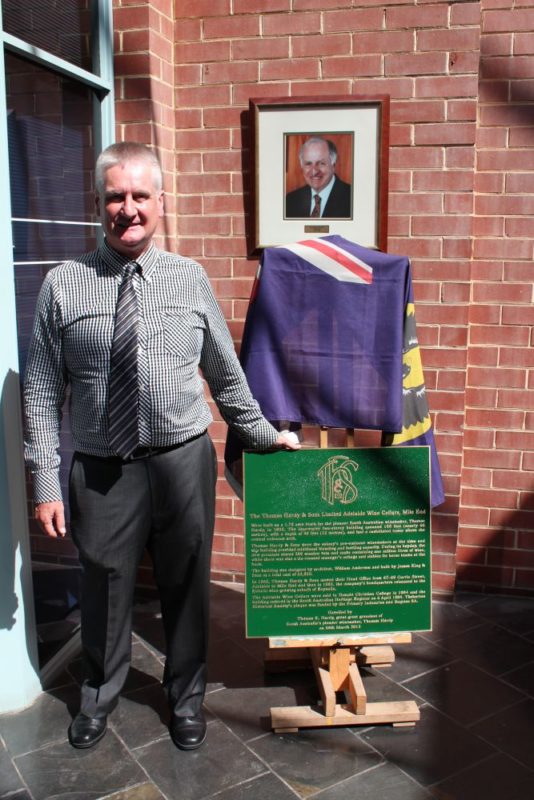