With much sadness we report the death of City of Mitcham Council’s Community Historian Maggy Ragless, who passed away unexpectedly in her sleep in March, just a few weeks off from her 60th birthday.

Maggy had been Mitcham’s local history officer since 1986 as well as devoting many hours of voluntary service to promoting the history of the area. Based at the Mitcham Heritage Research Centre, part of Mitcham Cultural Village at the corner of Princes Road and Torrens Street, it was more than fitting that in January she was made Mitcham Council’s Australia Day Citizen of the Year for her dedication in the role of preserving the area’s history.

She was well known to us here at History SA having been involved in numerous History Weeks, State History Conferences and workshops that we have organised.  She had also initiated several innovative community history projects for which she had been successful in gaining financial support through our annual South Australian History Fund grant scheme.  These included some commemorative and interpretative ceramic tile top picnic tables in the Hannaford and Cedar Reserves as well as the refurbishment of the original Blackwood Railway Station sign, one of only two left in South Australia.

Maggy willingly shared her vast knowledge and is remembered for giving many talks to groups of all ages and particularly for initiating her slow bus tours around Mitcham and ‘memory afternoons’. She was a foundation member of the Historical Society of South Australia (established 1974).

Maggy was descended from the pioneer Ragless family who arrived in South Australia from London/Portsmouth on the barque Eden on 24 June 1838.  In 1988, to celebrate the 150th anniversary of the family’s migration she wrote Dust Storms in China Teacups: Ragless Family Heritage to Australia in conjunction with the Ragless Reunion committee.  She also contributed to 5 other SA publications.

A memorial service was held for her at the Mitcham Reserve on Norman Walk last Monday 30 April which was attended by a large number of people.  There were many fitting tributes to her ‘can do’ attitude and ‘people skills’ and overwhelming enthusiasm for history and bringing it out from the archives and into the community.

We send sincere condolences to her family, friends and work colleagues including the many dedicated volunteers who assisted her. 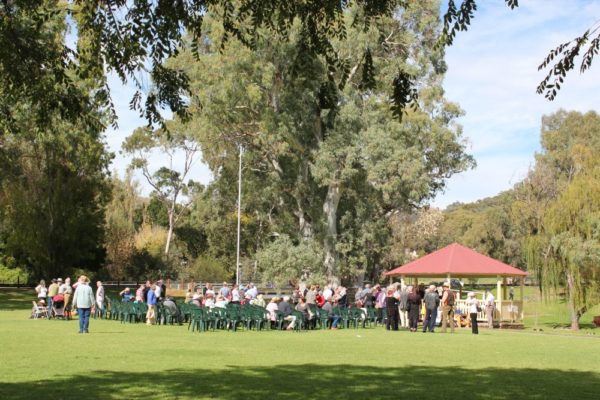