Last week I caught up with Peter, Roger, Colin and Lindsay at the Southern Fleurieu Historical Museum, to have a chat about some collection management issues. The museum is fairly new and while much of the existing collection comes from a few local sources, since opening their premises on the Port Elliot showgrounds they are getting many more offers and accepting many more items. The Museum has an agricultural focused collection with a lot of general history items as well, including a sulky that brought one of the first young married couples to Mount Compass and a 100 year old wheat bag stencil.

It’s always great to work with a museum when they’re just starting out, and even though the task is a bit daunting, the museum is keen to put some basic procedures in place for recording the items that they have collected so far and to work out some basic policies for guiding future collecting. The best time to get cataloguing started and donation forms in use is when a museum is young!

The Museum had intended to be based at Mount Compass, but the location at Port Elliot is a real bonus. In neat, easy to find premises behind the Port Elliot Primary School (whose students have already done some restoration work on a couple of large objects), it’s a great spot with opportunity for expansion down the track.

The Museum is open on Thursdays and other times by arrangement. 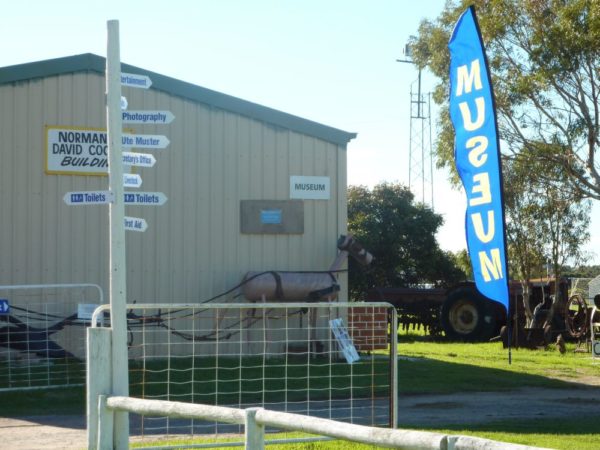