Almost 1300 entries in the 32nd Bay to Birdwood Run gathered at Barratt Reserve on Adelaide Shores along with around 5000 spectators in the early morning of Sunday 30 September for the start of what is described as the world’s largest most continually held historic motoring event.

Before the official start the spectators joined the cars and their drivers for breakfast giving all an opportunity to wander among the entries, admire polished chrome, innovative outfits as well as share stories and motoring memories.

At 8.30 am City of Holdfast Bay’s Mayor Ken Rollond along with a representative from the Premier’s office cut the ribbon and the race began.  Each car was waved off with a flamboyant wave of the chequered flag by lithe Glen Dix in his mustard yellow blazer, who had performed this task in a similar showy manner when the Grand Prix was in Adelaide from 1985-1995.

Three antique planes, including two monoplanes performed a flypast over the Reserve to add more historic flavour to the proceedings.  George Lucey’s 1926 bright yellow Phantom I Rolls Royce was the first car to leave.  It had featured on the Bay to Birdwood’s publicity material as this year’s theme was the Roaring Twenties.

Thousands then lined the 72 km route to cheer on the old cars as they made their way through the city and up to the Adelaide Hills for further revelries at the finish at the National Motor Museum in Birdwood. 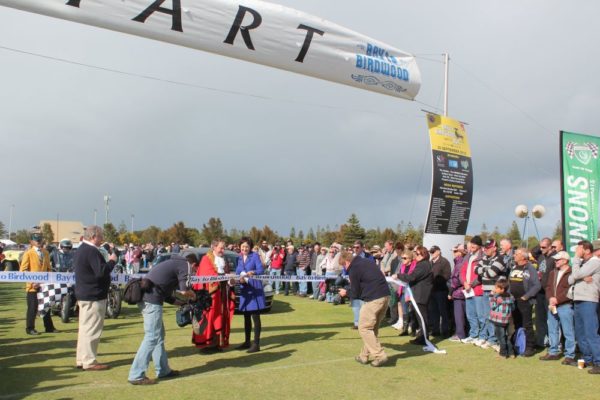