Like many others, I attended a Remembrance Day service last Sunday.  I could have attended any number of services around Adelaide on 11 November, the day we remember on the 11th hour, of the 11th day of the 11th month, those members of the armed forces who died in the line of duty. For example, there was the state service held at the South Australian National War Memorial on North Terrace while another was held at the AIF section of West Terrace cemetery which this year was acknowledging the contribution of the men and women of Bomber Command. And, of course, simultaneously there were numerous community-based services of remembrance being held at local war memorials and RSLs in numerous towns all around the state.

However this year I chose to attend the ceremony held at the Centennial Park Cemetery on Goodwood Road in Pasadena.   Each year Centennial Park remembers those who paid the ultimate sacrifice with a moving Remembrance Day Service, which is attended by representatives from all the armed forces as well as the SA Police, MFS, SES, RSL and Legacy, amongst others, and approximately 300 members of the public.

I was keen to hear and meet this year’s guest speaker Hamish Ludbrook, 18-year-old Scotch College student whose great grandfather was James Park Woods who had received a Victoria Cross for conspicuous bravery and devotion to duty near Le Verguier in France on 18 September 1918.  I had become close to ‘our Jimmy’ as he was called by the media at the time whilst researching for the travelling exhibition Bravest of the Brave, a collaborative project between History SA and Veterans SA, about the eight South Australians awarded the Victoria Cross during the First World War.  In fact I had just collected the display from Two Wells where it had been exhibited for the past month at their RSL sub branch.  The son of a local blacksmith, Private Woods had been born at Two Wells and his mother, who died when he was just a boy, is buried in the town cemetery.  Hamish wore a replica of his great grandfather’s Victoria Cross with pride throughout the ceremony and spoke movingly how he had heard stories from his grandmother how Woods’ war experience had affected him both physically and mentally.

It seemed a special place to be remembering those in our lives past and present effected by war. We were gathered beside the great marble Cross of Remembrance and beneath the boughs of two pine trees which had been propagated from seeds brought back from Gallipoli’s Lone Pine.  All around us we could see and hear the flapping of hundreds of small Australian flags, each one planted on the site of a grave or memorial rose tree belonging to a returned service person in the green expanse of the Derrick Gardens, established in 1956 and named after South Australian WWII Victoria Cross recipient Lieutenant Thomas Derrick.

Along with the Catafalque Party made up of four Air Force Cadets, the service’s pomp and ceremony was heightened by the presence of two members of the Barossa Light Horse Historical Association on horseback and others from Re-Enact SA in WWII uniforms while the Scotch College Pipes & Drums Band completed the stirring procession.  After the official laying of wreaths, Raymond Gordon Baldwin OAM read the Ode to the Fallen followed by the Last Post and traditional One Minute’s Silence.  The singing of the National Anthem and a beautiful rendition of the famous poem ‘In Flanders Fields’ by the Walford School for Girls’ Capella choir concluded the official proceedings before we adjourned to the Jubilee Complex for morning tea.

There was an exhibition by the to view in the complex and I’m pleased to report that the Bravest of the Brave exhibition will be displayed here for the Remembrance Day Service in 2014 which also commemorates the centenary of the start of the First World War.  Currently it is on display at Stirling’s Coventry Library until 9 December and at various venues all over South Australia throughout 2013. 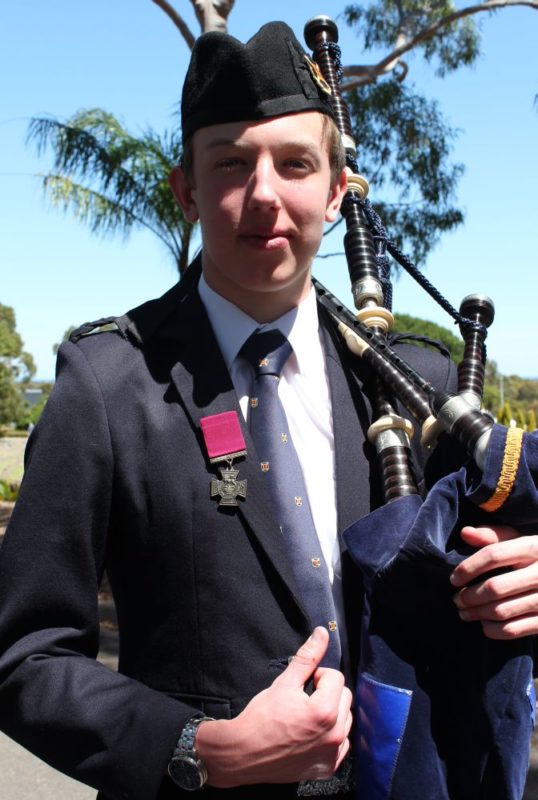