Bravest of the Brave, a joint history SA/Veterans SA touring exhibition telling the stories of the eight South Australian men who were awarded the Victoria Cross during the First World War is now at Stirling’s Coventry Library in the Adelaide Hills until 9 December under the auspices of the Mount Lofty Districts Historical Society.

This very active volunteer-run organisation has their own Local and Garden History Centre within the state-of-the-art Coventry Library, with space for research and storage of books and archives.  Bravest of the Brave was launched at the library on Friday evening to coincide with a special Remembrance Day presentation at the society’s November monthly meeting.  An emotive and inspiring talk was given first by primary school teacher Ann Kellett of the Scott Creek, Bradbury and Longwood History group regarding the research she has been undertaking since 2008 on the school Honour Roll and Memorial Avenue of trees with her primary school class.  This has developed into a major project with the history group and they intend turning the researched life stories into a publication ready for the ANZAC centenary in 2015. The main guest speaker was Dr Richard Reid, Senior Historian with the Commonwealth Department of Veterans’ Affairs, who spoke about the $10 million federal-funded Australian Remembrance Trail currently being developed by his team along the Western Front.

The audience had the opportunity to view the Bravest of the Brave display before and after the talks. Two of the eight men featured have connections with the Adelaide Hills.  Both Arthur Seaforth Blackburn and John Leak settled at Crafers with their respective families late in life and Leak is buried at Stirling cemetery.

Two pieces of local Adelaide Hills WWI history recently saved by MLDHS and restored with a grant by Artlab were also displayed that evening.

One was a stunning wooden WWI Roll of Honour from Scott Creek, found rotting in a shed. The other was a framed memorial scroll for Corporal William Hurtle Driver discovered in the loft of the Stirling RSL where it had been transferred from Uraidla RSL on the latter’s demise. Born in Summertown, Driver had attended Uraidla Public School and was a labourer when he enlisted aged 32 before heading for Gallipoli with the 11th Battalion. He survived and was transferred to the 51st Battalion but killed the following year at the Battle of Pozières on the Somme on 3 September 1916, strangely enough on the same day, in the same conflict, that both Blackburn and Leak won their Victoria Crosses. 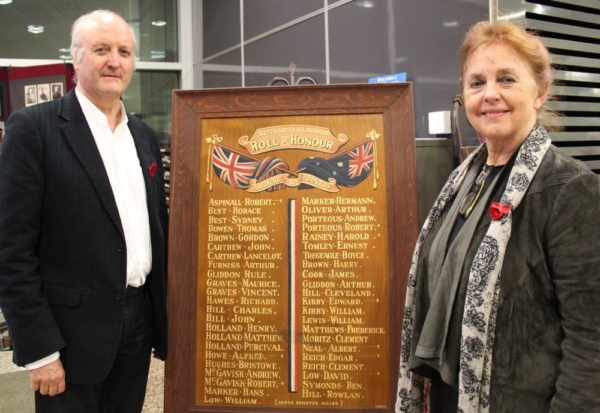