There was an historic event for South Australia on Kangaroo Island recently when a reunion of the descendants of the families that arrived there 175 years ago on the sailing ship Solway took place.

The Solway, a 3-masted, wooden sailing ship of 337 imperial tons, left the German port of Hamburg, on 3 June 1837 with around 70 passengers on board.  These were some of the first German settlers to arrive and remain in South Australia.  The South Australian Company had sent the first settlers to South Australia via the Duke of York the previous July.  The company found that they required some labourers to ensure the survival of the colony and asked the German government if they would allow German families to immigrate to South Australia.  Hence the Solway was sent to Hamburg to collect the passengers who were to undertake the gruelling four and half month voyage to the other side of the world.

The reunion coincided with the landing day on 16 October 1837 at Reeves Point, Kingscote. 120 people, representing thirteen of the 28 original families attended the Gala Dinner at the Aurora Ozone Hotel on Saturday 13 October plus descendants of the Solway’s first Officer Louis Hanson.

Only two months after its arrival in Australia the Solway, which was anchored at the South Australian Company’s station at Rosetta Harbour, Encounter Bay (near Victor Harbor), was unfortunately wrecked after breaking from its moorings and driven over a reef during a storm.  Sue Pender, who has been researching the history of the Solway, spoke on the remains now sandbagged for safekeeping in Rosetta Harbour.  Evan Kleemann (a fifth generation attendee) entertained the gathering with ‘a bit of German’ humour. The story of the first Officer Louis Hanson was related by one of his descendants, Allen Clark, telling how Hanson remained in South Australia after the Solway’s demise and went on to purchase and sell a considerable amount of land around the State.

A commemorative Church service was held on Sunday morning in the Kingscote Institute followed by a light lunch.  Tables of memorabilia were displayed in the hall for all to catch up on family history.  Each family then presented stories of their forefathers and families, as they knew them, hoping to fill in some of ‘the gaps’. There are plans to put some these stories into a booklet to preserve this special history.

Monday was free for sightseeing; for example, to visit the historic mulberry tree on the slopes of Reeves Point,  possibly the same mulberry tree that was planted in the memory of one of the Solway’s passengers, Mrs Maria Kleemann who had died 2 days prior to landing and was buried in the pioneer cemetery nearby.

On the Tuesday morning, the group gathered at Reeves Point where Deputy Mayor Peter Clements and 91 year old Colin Gramp, a descendant of one of the passengers, Johann Gramp unveiled a commemorative plaque, marking the 175th celebrations.  Sue Pender gave a ‘picture in words’ of what Reeves Point looked like in 1837 and the event concluded with a prayer of thanks.

David Christian and Jan Heppner should be congratulated for such a successful event.  Jan from Waikerie reports that attendees came from all over South Australia and the Eastern states and that she has received emails regarding the reunion from Australia-wide, the USA and the UK and is still receiving correspondence from descendants who missed out.

The event was reported here in The Islander, Kangaroo Island’s local newspaper 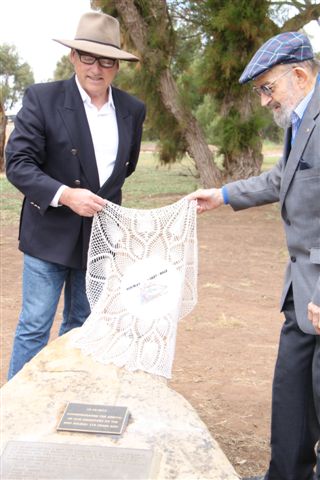