Last Friday I returned to Stirling’s Coventry Library in the Adelaide Hills where I’d set up the travelling display Bravest of the Brave in November to attend the Mount Lofty Districts Historical Society’s Christmas gathering.  It was a great blend of my two favourite subjects – food and women’s history.

Culinary historian Allie Reynolds gave a fascinating presentation to a large, enthusiastic audience on the untold story of the woman behind famous Adelaide Hills’ painter, Sir Hans Heysen.  This was his wife of nearly 60 years, born Selma (known as Sallie) Bartels.  Daughter of the former mayor of Adelaide Adolph Heinrich Friedrich Bartels, she had met Hans when she was his art student and they married in 1904.  They were to have 8 children – including Nora Heysen, Australia’s first female Archibald Prize winner and war artist – and made their home at The Cedars, on 36 acres outside Hahndorf, which is now open to the public and still owned by the Heysen family.

Allie revealed some magical aspects of life at The Cedars for Sallie was legendary for her baking.  She gave us a glimpse at some of her research into Sallie’s recipes and conversations with the Heysen’s children and grandchildren on their memories of Christmas at The Cedars, as well as reading excerpts of family letters and diaries which gave us a ‘whiff of Christmas’ just like Nora Heysen describes when receiving some of her mother’s biscuits by post.  We could visualise the giant Christmas tree in Heysen’s studio decorated with gingerbread letters and smell the fruit cake and biscuits baking in Sallie’s kitchen.

Our mouths were all watering by the time the presentation finished and ready to sample the honey biscuits (Honigkuchen) which Allie had baked from one of Sallie’s recipes, and discover the winners of the Heysen-related raffle prizes.  But there was another final treat in store when well-known Crafers identity Frank Curren publicly donated to the MLDHS a pair of Hans Heysen’s lace-up leather gaiters, which had been in his family for many years.  Worn with his knee length trousers and long socks, they were typical accessories seen in photographs of the artist on painting trips.  What a wonderful gift and a great ending to the MLDHS’s year!  I suggested they contact conservator Sophie Parker at Artlab regarding the appropriate preservation and storage of these leather items.

Proceeds from the event went to support the publication of Allie’s proposed book on Sallie Heysen which I am sure will be very popular. 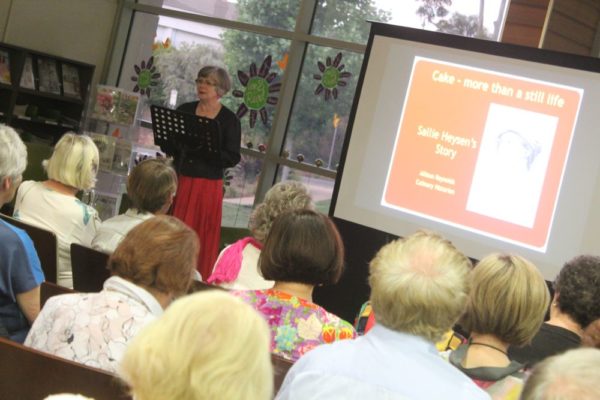