Only two major breweries now exist in South Australia both with histories of 150 years or more.  However did you know that there were numerous small breweries operating throughout the State from settlement in 1836 to the mid-1950s?  A new book has recently been published which tells the fascinating story of these early brewers, explaining why so many failed and how brewing giants Coopers and West End have survived.

Alison Painter’s Beer Barons or Bankrupts? Early Brewers in South Australia is divided logically into periods covering the establishment, growth, and contraction of the industry in the state.  This 345pp hard cover book is well-researched and illustrated by a splendid array of photographs of people, breweries and other buildings plus colourful beer labels and some excellent sketches prepared by Alison’s husband John.

A professional historian, Alison has a background of experience within the brewing industry and has previously published works on both Coopers and the Johnstons of Oakbank.  The book received financial support from History SA through a South Australian History Fund 2010-11 grant and from brewers Coopers and West End.

As well as delving into the pictorial records of the State Library, she also researched the archives of many community museums and historical societies throughout the state such as those based in Burra, Clare, Gawler, Goolwa, Jamestown, Kapunda, Melrose, Mount Gambier, Oakbank, Port MacDonnell and Walkerville.

The cover of the book shows a wonderful image of WH Baker delivering beer to the Old Spot Hotel in Gawler dating from the c1880s, courtesy of the John Clift Collection. 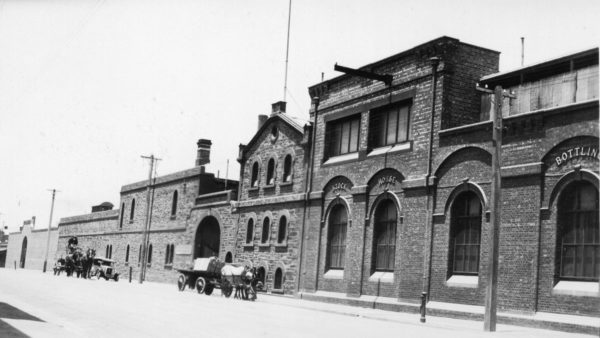