Frisque is a unique exhibition featuring beautiful items of corsetry, underwear and nightwear from the National Trust of South Australia’s extensive costume collection.  Dating from c1885-c1935, many of the garments have not been shown to the public before. As the poster declares it is ‘a once in a lifetime opportunity to step inside Madam’s Boudoir’.   Set against the chandelier-lit Lyon and Cottier designed formal dining room ceiling which is regarded as the most significant hand painted ceiling in Australia, the various garments of lace, silk, broderie anglaise and satin displayed amongst appropriate accessories, look stunning.

This exhibition has been curated by Ayers House Museum volunteer Madeleine Seys who has been involved with the museum since 2004.  When she is not working on the costume collection, she is wearing a mop cap and playing the part of the ‘tweeny’, (between maid so called because she works between the housekeeper, butler and cook) in Ayers House’s popular After Dark series.  This is Madeleine’s first foray into exhibition curation and it is hoped there will be more opportunities in the future.  She says she really enjoyed the experience as it was not only a chance to show off many of the beautiful items she has discovered in the collection but also use research undertaken for her PhD “Fashioned Fictions and Textured Texts: Femininity and Narrative in Victorian Popular Literature” which she is currently working on at the University of Adelaide.

Frisque is on display for one week only Tuesday 26 February to Tuesday 5 March.  Entry is by gold coin donation.  More photographs from the opening night can be seen here.

Ayers House is located at 288 North Terrace opposite the Royal Adelaide Hospital.  It is a National Trust property and an accredited museum in History SA’s Community Museums Program. 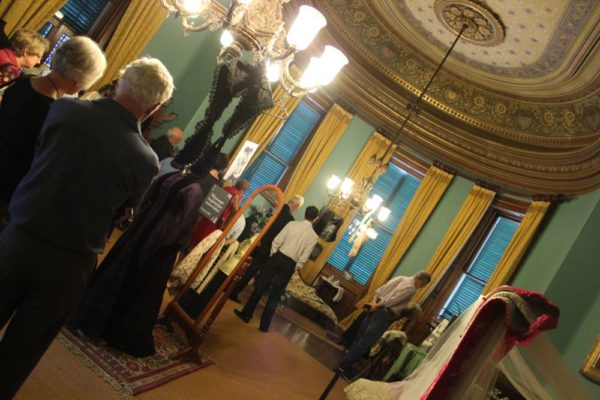