New interpretive displays at Scholz Park Museum in Riverton were officially opened on Sunday 24 February by the museum’s president and secretary, John Glistak before a group of enthusiastic locals.  Also attending were the creative team who carried out the work, designer Peter Templeton and consultant historian Geoff Speirs; as well as History SA’s Community History Officer Pauline Cockrill.

Scholz Park Museum is a registered museum in History SA’s Community Museums Program (CMP) and received a 2008-9 CMP grant to partly fund the first stage of the new development intended to tell the story of the pioneering Scholz family within the cottage.  Funding from other sources was received for some of the display and to restore aspects of the heritage-listed buildings.

The museum is a complex of 3 buildings within a small park consisting of a cottage and a wheelwright and blacksmith’s workshop, all representing the home and livelihood of the Scholz family over 2 generations for a little over a hundred years.

A Silesian migrant and wheelwright, August settled at Riverton with his wife Wilhelmine in 1865. They built the four roomed stone cottage in 1872 and lived there with their eight children. Later August bought the adjacent blacksmith’s shop and with his 3 sons carried on the business as wheelwright, blacksmith, machinist and coachbuilder, meeting the needs of the people in the area. August’s two grandsons eventually sold the property to the Riverton council in 1970 on the understanding that it would be preserved as an example of a bygone era. After restoration the buildings eventually opened to the public as a museum in 1981.

The new interpretive panels in the cottage do not interfere with its ambiance but subtly highlight some of the stories relating to the objects on display.  Particularly poignant is the story of August’s elderly spinster daughters Polly and Huldie who died of heat exposure during the particularly hot summer of 1939.

Guests at the launch were not only able to visit the adjacent wheelwright’s shop but also watch two members of the Artists Blacksmiths Association of South Australia (ABASA) demonstrating their skills in the blacksmith’s shop which has three hand blown forges and a full range of functional equipment.  Members of ABASA operate the forges on the last Sunday of the month where possible. 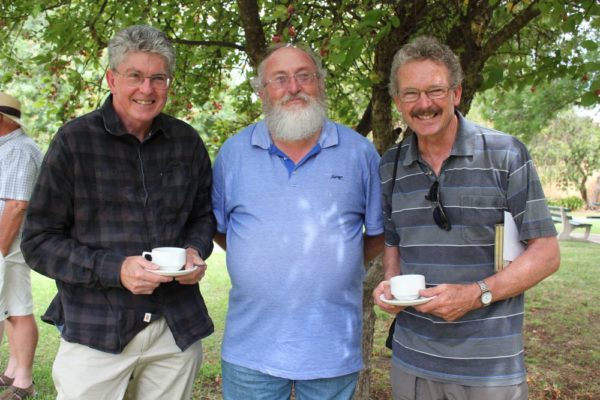