This week Amanda and I drove the 250 km or so to the Riverland to visit Loxton Historical Village, one of the 61 museums on our Community Museums Program.  We had arranged to meet with Tracy Bye, Tourism Manager for Loxton Waikerie council who is responsible for the management of this unique open air museum which will be celebrating its 40th anniversary later this year.

It was good to catch up and hear about her plans for the complex but particularly to discuss their forthcoming interpretation project, funded through a 2012-3 History SA CMP grant.  After some initial chat in her office at the Loxton Visitor Centre, formerly the local fire station, we had the opportunity to visit the complex where the volunteers were busy preparing their float for the Loxton Mardi Gras parade at the weekend.   However it was probably the only museum we have visited where the welcome party included a kangaroo and three sheep!

The Village has come a long way since its beginnings in 1970 when a pug and pine hut was recreated based on the town’s first building, the so called “Loxton’s Hut” originally occupied by the man who gave the town its name, William Charles Loxton, a boundary rider on Bookpurnong station.  Other farm dwellings followed and a village street began to form, the complex being officially opened on 2 September 1973 by then SA Premier, the Hon Don Dunstan. It received another boost with Centenary of Federation Funding to create the area called the Irrigation Museum.  It now is made up of over 45 historic or replica buildings that have been either moved here from other locations or recreated by volunteers. Its plan and history can be found here while the enthusiastic staff and volunteers now put on three “Village Alive Days’ a year.

There was lots to see and lots to discuss. With so much history, and so much ‘stuff’ in a museum collection it can often be a daunting task to know where or how to start a new display or interpretation project.  To get the ball rolling, Amanda put together a simple template for the interpretation plan divided into key messages, stories and format.  Sometimes you have to stand well back and think ‘what is the main thing you want the visitor to learn or remember about a topic’; and then ‘what are the best stories you can use to illustrate it’?  Finally you have to decide how best to tell that story – should it be with text panels, objects, multimedia or a combination?  This group are considering using QR (Quick Response) codes as part of their overall interpretation plan and we look forward to working with them on this new and exciting journey. 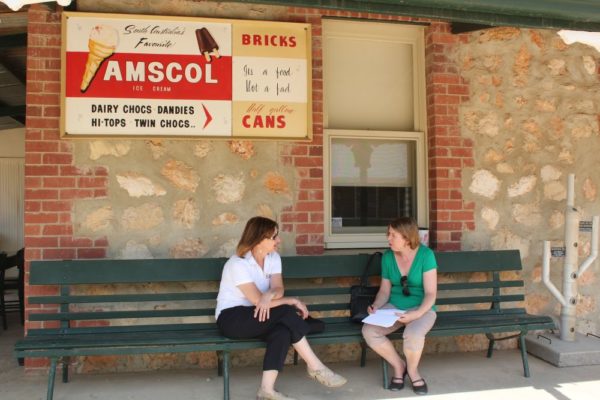