The National Railway Museum in Port Adelaide recently launched an exciting program of events to celebrate its 50th anniversary this year.  A launch party was held at the museum on Friday 25 January which was attended by many long-time supporters, members, volunteers and previous staff from the museum as well as several distinguished guests.

Museum president Barry Marshall hosted the event and there were official speeches by the Federal member for Port Adelaide, the Hon Mark Butler; the founder of the museum, Ron Fluck; and Managing Director of Genesee & Wyoming Australia, Bert Easthope.  Bob Sampson, the museum’s Executive Officer announced the bumper program of events on offer for the year which will include behind the scenes tours, the launch of the Bluebird Kestrel and the newly restored Onkaparinga Overland car, an art competition for the About Time History Festival in May.  The year will culminate with a formal 50th anniversary dinner and the return of the Redhens shuttles to Adelaide Station.

More images from the launch party can be seen here

The museum began in 1963 when a group of rail preservationists, alarmed at the scrapping of steam locomotives which had served South Australia for many decades, set about saving, restoring and maintaining many of the historic vehicles in the museum today.

The first railway museum was located on Railway Terrace at Mile End but with the assistance of the History Trust (now History SA) the museum secured a $2 million Australian Bicentennial Grant and was able to move to the current premises.  Then called the Port Dock Station Railway Museum, it was officially opened on 10 December 1988 by the Premier of South Australia, the Hon John Bannon.  More funding via a Centenary of Federation grant enabled them to expand and open the Commonwealth Railways Museum (now known as the Ronald E Fluck Pavilion) within the facility in 2001 and the whole precinct was renamed the National Railway Museum.

Along with the usual displays and regular programs, currently there is a special photographic exhibition and slide show at the museum illustrating the developments over its successful 50 year history. 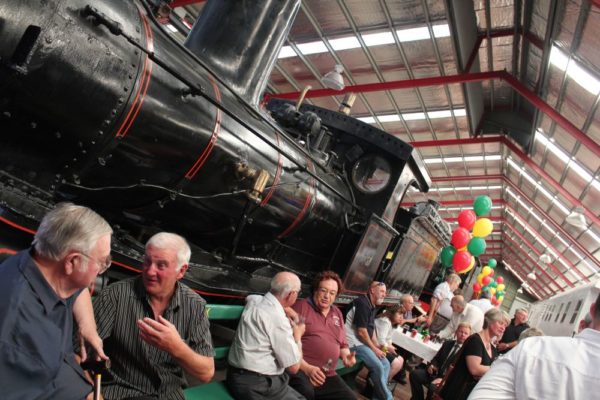