A little bird told me that one of Angaston’s historic icons has just got a Facebook page. A cockatoo has become the unofficial spokes ‘person’ for the A&H Doddridge Blacksmith’s shop in Angaston, steeped in history with over 130 years of blacksmithing at this site and one of only a few operational ‘smithies’ in existence in South Australia.

Facebook Cocky represents the popular town cockatoo and his feathered friends who have been living at the historic smithy on Angaston’s main street for around 80 years.  What a lot of history Cocky would have witnessed – if only he could talk.  Well, actually the original cockatoo could.  Apparently he said ‘aeroplane’ when one flew overhead and ‘Anybody home, Mrs Doddridge’ when there was a knock at the door. However, through social media and a little bit of innovative ingenuity on the part of the historical society, Cocky can now chat online about Angaston’s history to all those passing by in cyberspace.

The Angaston cockatoos have been long-time crowd pleasers in the town. The original Cocky was owned by the late Hardy Doddridge, reputedly South Australia’s oldest blacksmith, who was still working at 96 almost right up to his death in 1982. Aged just 16, Hardy had taken over the business with brother Albert from their father in 1902.   Cocky, the sulphur crested cockatoo, came into Hardy’s life as a young bird in about 1933. Using his blacksmithing skills, Hardy built him a unique cage adjoining his shop and next to the Doddridge family home (now the Angaston Vet Clinic – very handy for Cocky’s health down the track). Every night Cocky was taken out of the cage and sat on a perch in the blacksmith’s shop. Apparently he ate walnuts and thistles and always enjoyed bread with hot water or milk. Following Hardy’s death, Cocky went to live in Naracoorte with Hardy’s granddaughter and died aged 76 in February 2009.

However, back in Angaston, a new cockatoo moved into the purpose-built cage. This was Bruce who entertained passers-by for about 25 years. He was there while the local community fought to buy back the blacksmith shop and its contents for the town, eventually opening it as a museum in 1996. Unfortunately in June 2012, Bruce was found to be missing. The padlock to his cage was cut and Bruce was either released or stolen. After his demise, a lady donated Jacko to take on the role of the Angaston Cocky. Locals say that Jacko actually seems to be friendlier, tamer and more joyful than Bruce.

I certainly witnessed Cocky aka Jacko’s people-magnet skills during my last trip to Angaston when members of the A&P Historical Society and I first talked about the possibility of using social media to promote the blacksmith’s shop in an original way. And I’ve just heard he’s becoming a TV star. On Wed 20 March he will feature on Channel 10’s Totally Wild at 4 pm. 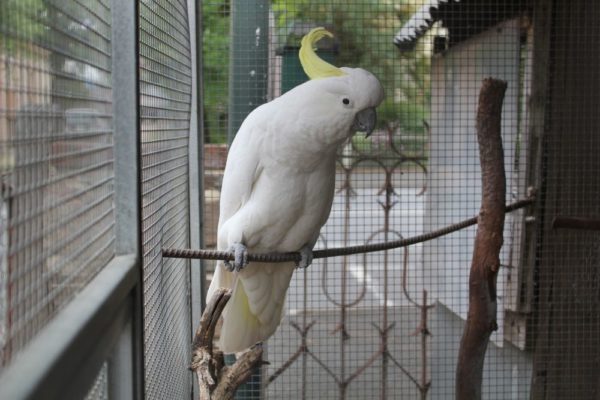