The South Australian Aviation Museum in Port Adelaide has become the first in Australia to take delivery of a former RAAF F111 jet bomber.

The retired jet – which can reach speeds up to two-and-a-half times the speed of sound – arrived at the Port Adelaide museum on Monday 18 March. It left Amberley RAAF Base in Queensland, near Ipswich, on board a truck on the Friday before and travelled more than 1200 km through NSW, Burra and Gawler. It comes after the Federal Government announced the museum would be one of six groups nationwide to take delivery of the retired jets last October.

The F-111s, which were retired in December 2010 after 37 years of service, are best known for their spectacular displays at air shows and major sporting events where they would do ignited “fuel dumps”. SA Aviation Museum public relations officer John Roberts said the jet would help boost tourism in Port Adelaide and the state. He also expected ticket sales to increase, giving the museum’s volunteers more funding to restore and maintain its aircraft.

“People would have seen the F-111 blow fire out of its rear end and in pictures everywhere,” Mr Roberts said.“It is a modern-day icon, so it’s a very significant and prestigious thing to have one here.”

Visitors were able to see technicians from the Amberley RAAF Base reassemble the jet before it was put on display in the museum’s hangar. It is now ready to be viewed at the museum at 66 Lipson St, Port Adelaide, and open every day from 10.30am to 4.30pm. Tickets: $9 for adults and $4.50 for children under 16.  The South Australian Aviation Museum is an Accredited Museum in History SA’s Community Museums Program. 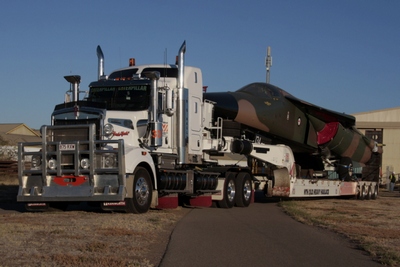