This week Pauline and I made a flying visit to three CMP museums, with a bouncy descent into Mount Gambier seeing us emerge onto the tarmac into a very hot early evening and a swarm of bees at the terminal door.

Picking up our hire car we headed off for an evening meeting with members of the Millicent Living History Museum to have a preliminary chat about the museum’s CMP re-accreditation and to see progress being made with several projects.  I was only at the museum last May, so it was quite astounding to see how much more has been achieved since then, particularly in managing the National Costume Collection, which the museum took on from a private collection in Lobethal only about 18 months ago.  Last time I was at the Millicent Museum much of the collection was still crammed into packing boxes, but now it has almost all been unpacked, sorted and hung on racks or re-boxed.  The volunteer team working on this project, led by Lucy, is working very hard with limited existing catalogue records to identify the ‘treasures’ amongst the collection and make plans for a costume display in the former Millicent Primary School Building (on the museum grounds and acquired and re-furbished since my last visit).  A great deal of research about designers, wearers and fashion shops is being done as part of the collection management and display project.  The Museum also manages a horse drawn vehicle collection of some 100 items and an extensive complex of Millicent history displays.  Amazing really that a fairly small group of volunteers can do so much!  You can see photos of Millicent Museum here.

After a warm night in Millicent we headed off next morning back through Mount Gambier and out to Port MacDonnell for a project meeting with the Port MacDonnell Maritime Museum committee, who are developing an audio-visual introduction to the museum and a computer-based display about the districts shipwreck history.  We enjoyed the lively discussion with the group about key messages and the specific information and visuals that will be included.  The museum group has settled in nicely to their new premises in the Port MacDonnell Community Complex and the audio-visual project is their major foray into re-invigorating the much-loved displays of shipwrecks and locally significant stories and objects.  Photos of the museum here.

We then headed off to Beachport for a project meeting with the Old Wool and Grain Store Museum, who are redeveloping the front two rooms of the museum to tell the history of the building and highlight some of the main themes of the museum.  Discussion centred mainly on the content of the displays and the style of presentation with lots of great ideas explored.  Various people lived and worked from the building over the decades since it was constructed in the 1880s and the building has several points of interest in its construction such as train line running through the middle and a mechanics pit from when the building was used as a garage (which now makes an unusual donation tin).  More photos here.  Beachport and Port MacDonnell museums both received 2012 CMP grants for their projects. 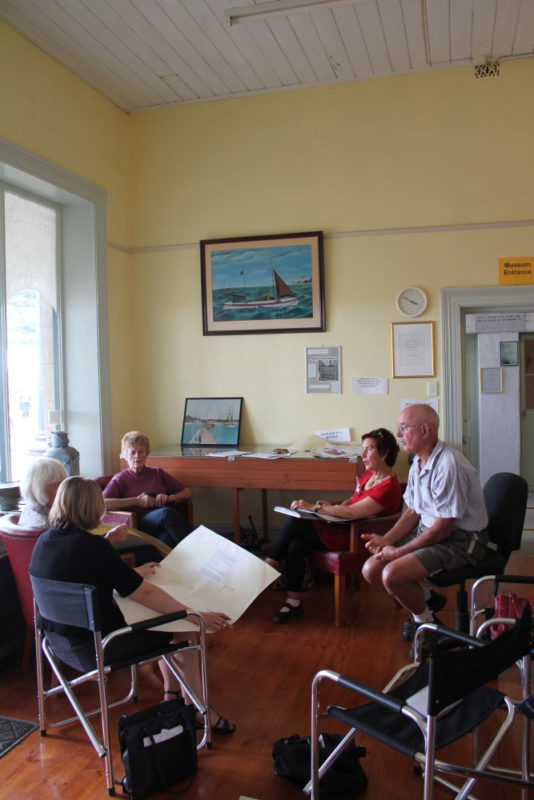