The recent news story posted on our website about Allison Reynolds’ search for the oldest Anzac biscuit recipe, resulted in many old cookbooks coming out of the kitchen drawer.  Since then this Adelaide Hills’ culinary historian’s hunt has been radio broadcast on ABC891 and FIVEaa Adelaide as well as printed in the Advertiser and the Hills Courier.  It seems everyone wants to help in solving the mystery.

It was fascinating to catch up with Allie on Sunday at her presentation at the Adelaide Farmers’ Market, at the Wayville Showgrounds. There was quite a gathering for the session, and many had brought with them their family heirloom recipes or cookery books.  Allie’s enthusiastic research crew got down to business, photographing pages and taking notes, before and after the event. It was good to see Carol Moore of the Mount Lofty Districts Historical Society with her grandmother’s handwritten cookbook from the WWI period, with its topical amendments – the word ‘German’ being replaced by ‘Belgian’ in some recipes!

While baking up a batch of Anzac biscuits, Allie reported on her recent research which she is undertaking in readiness for the start of ANZAC centenary commemorations in 2014. There is still a hot debate regarding whether the first printed Anzac biscuit recipe was from New Zealand or Australia. And we learnt a lot about ingredients: that butter was the only consistent ingredient in all the different recipes; and that coconut only began appearing in recipes from the 1920s. Whether the biscuits should be chewy or crispy was also another issue in question. Allie went on to discuss the difference between the Anzac ‘wafer’ or ‘tile’, that was a hard ship’s biscuit given out to soldiers by the army and sometimes made into ‘trench porridge’ when pounded with water; and the Anzac biscuit, made by loved ones at home to send to the Boys overseas, and is the biscuit that we know today.  Eggless so that they would last the long voyage of several weeks to Europe, these biscuits were generally sent in air tight tins. Allie shared with us some delightful information gleaned from newspaper articles and advertisements about how thousands of tins were repurposed with this aim in mind, even old kerosene tins.  She also brought with her a large size vintage golden syrup tin, like those used for sending over sweets (lollies) as part of comfort parcels to soldiers overseas.

Allie also has a Facebook page where you can join in the great Anzac biscuit debate!  She is still on the lookout for pre-1920 Anzac biscuit recipes. Contact her direct if you can help with information. 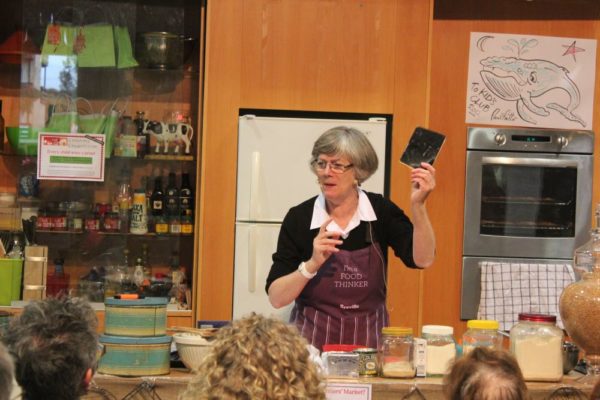