City of Charles Sturt’s upgraded Pennington Gardens Reserve was officially launched yesterday (8 October).  The park is dedicated to the thousands of migrants who passed through the Finsbury/Pennington Migrant Hostel which occupied 40 acres of land along Grand Junction Road, including this site, for nearly four decades until 1985. Former hostel residents, staff, and their families joined council officials, designers Arketype and the Hostel Stories research team in an enjoyable community event in the late afternoon sun.

The upgrade was a response to the devastating vandalism of the original hostel memorial last year.  The reserve was first created in 1993 when artists Hussein and Angela Valamahesh installed the Booker Court Memorial, featuring 13 inscribed bronze diaries with memories collected from interviews with many people who originally stayed at the hostel.  In March 2012 this art work was trashed and stolen.

The new interpretative project has involved improving landscaping, installing a barbecue, picnic facilities and artwork and signage, acknowledging the powerful and emotive experiences of hostel residents and the important role the hostel played in the migration of South Australians from the 1950s to 1980s.  Bowden-based design studio Arketype was contracted to undertake the installation which includes a representation of a Nissen hut; interpretive hoops; large scale cup, plate, knife and fork; and 15 interpretive diaries and entrance signage.

After the official speeches, a smoking ceremony was performed by Senior Kaurna Cultural Custodian Karl Telfer with assistance from Charles Sturt CEO Mark Withers and Mayor Kirsten Alexander in the Nissen hut-inspired barbecue shelter as well as the Garden of Memories.

In the early 1940s the site housed workers for a nearby munitions factory.  After World War II it was converted to accommodation for Displaced Persons from Europe. Until the closure in 1985 Pennington, formerly Finsbury Migrant Centre, was one of a number of centres in South Australia which catered for migrants who arrived here from different parts of the world including Europe, South East Asia, Middle East and South America.

Part of the new installation is a walkway with engraved pavers featuring the names of families who spent time at the hostel. One of these features former Prime Minister Julia Gillard, who spent her first month in Australia at Pennington when she was nearly five years old, after emigrating from Wales with her parents and sister in 1966.

The Pennington Gardens Reserve project has involved input from the team currently undertaking the Australian Research Council-funded Hostel Stories project at the University of Adelaide.  Another project partner, the Migration Museum launches their Hostel Stories exhibition next month.

More photos from the launch can be found here

If you would like to participate in the Hostel Stories research project phone 08 8313 5570 or email hostelstories@adelaide.edu.au or for more information go to this website 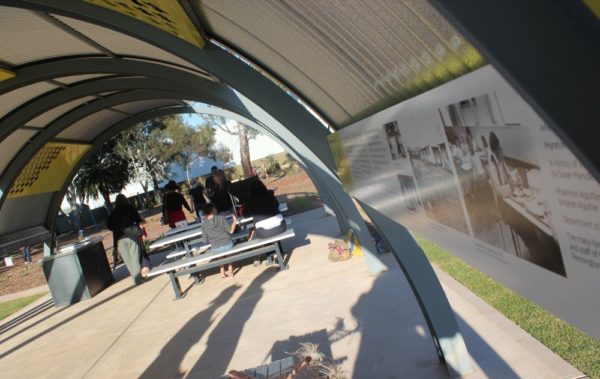