Last week Artlab’s Principal Textile Conservator Kristin Phillips and I headed for the airport.  We were on our way to Port Lincoln to run a two-day ‘Caring for Collections’ workshop for community museums and history groups. This skills development program is one that we run every two years or so in different regions but this was the first time we had offered such a workshop on the Eyre Peninsula. We were also able to offer it free courtesy of a National Library Community Heritage Grant.

It proved to be quite a logistical challenge.  Clutching rolls of Mylar and a laptop as well as a cutting mat secreted amongst our luggage, Kristin and I eventually arrived at the other end.  The next morning we were glad to find the other equipment we had sent on ahead by bus, safely stored at the Civic Centre where the workshop was to take place.

Almost 20 people attended each day representing nine organisations, not only from Port Lincoln but further afield from Koppio, Cummins, Mount Dutton Bay and even Whyalla.  Both mornings were spent learning the theory behind managing a museum environment, identifying risks and pests that might affect our collections as well as the right way to store or display archival material, photographs, costume and textiles.  Afterwards, participants could ‘have a go’ at what they had learnt.  Armed with magnifying glasses, torches and electronic environmental monitors, we gathered on the first afternoon at nearby Mill Cottage Museum, the mid 19th century Bishop family’s home to check for harmful insects and other pests, and to measure light, relative humidity and temperature.  The second afternoon saw us equipped with vacuum cleaners, sewing machines, Mylar, cutting mats and scalpels as the group learnt how to carefully surface clean items in their collection, make supports for costume and accessories and the art of encapsulation and making four flap folders.

It was terrific to see so much enthusiasm and practical skills amongst the group as well as many interesting and significant items that people brought along for advice.  These included a First World War signature supper cloth and an 1836 sampler. Particularly memorable was a poignant family heirloom in the form of a 1916 diary written by a soldier who had fought and died at Pozieres.  There was also a 500 page autograph book c1925-1955 belonging to the late Louise Brougham, a local philanthropist known for her work at the Port Lincoln Mission to Seafarers.  The book had been previously digitised through funding from a History SA South Australian History Fund grant.

There was also a surprise visit from a local journalist who wrote about the event in the Port Lincoln Times while I also had the great honour of officially opening Axel Stenross Maritime Museum’s new storeroom.

I hope that it won’t be too long when I can visit Port Lincoln again and see how people have put their new skills to good use.

More photos of the workshop can be seen here 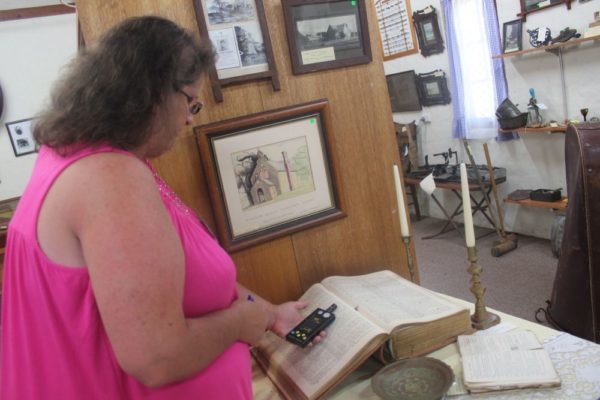