History SA/Veterans SA’s travelling exhibition Bravest of the Brave, which tells the moving stories of the eight South Australians awarded the Victoria Cross in the First World War, is on the move again.

Affectionately known as BoB, the exhibition has already spent the beginning of the year at Semaphore & Port Adelaide RSL, before heading south to Seaford Library where the display was opened by SA footy legend and Vietnam Veteran, Graham Cornes aka ‘Cornesy’.  Most recently BoB was displayed at Mount Barker RSL which included a visit from local St Francis de Sales College students on 28 March.

Bravest of the Brave has just been taken to Colonel Light Gardens RSL where it will spend ANZAC Day while its identical twin, BoB Mk II, is spending April at the Victor Harbor Visitor Centre to coincide with the 86 Transport Platoon (Vietnam)’s annual reunion.

Bravest of the Brave is available from History SA free of charge to travel to schools, RSL clubs, museums, libraries, aged-care facilities, community centres etc. There is also a schools resources kit.  Currently BoB Mks I and II are booked up to travel to a variety of venues in South Australia throughout 2014, but there are still a few spots available throughout 2015.

Enquiries regarding the exhibition’s availability should be made on 08 8203 9888 or email for more information.

More photographs of the display at other venues, including its launch by the Hon Jack Snelling MP in April 2012 are here 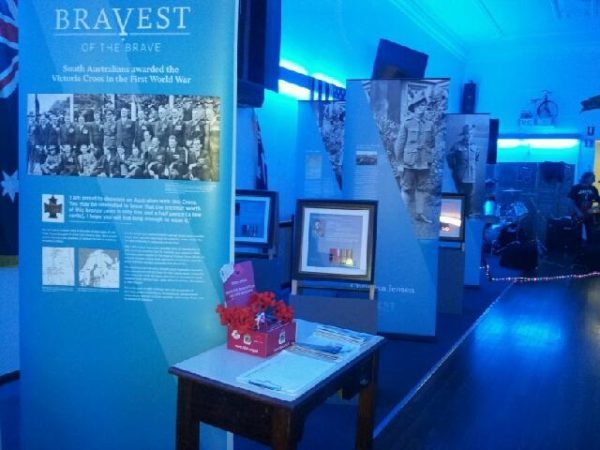