Following a welcome speech by the City of Adelaide’s Lord Mayor, Stephen Yarwood, the exhibition was launched by the Hon Zoe Bettison MP, the State Government’s new Minister for Veterans’ Affairs. It was her first official event in this role.

Some of the relatives of the medal recipients were at the launch including the son of Lionel Matthews, David who attended with other members of his family.

Project managed by History SA’s Amanda James and Pauline Cockrill, the display was researched and written by local professional historians, June Edwards and Madeleine Regan, and designed by Emily Woods of Arketype.

It consists of 10 pull up banners telling the history of both awards, a background to South Australia and World War II and the Vietnam War and the stories of the 5 recipients: Peter Badcoe VC; Thomas Currie (Diver) Derrick VC; George Gosse GC; William (Bill) Kibby VC; and Lionel Matthews GC.  The framed replica medals and citations of each man are also included.

The format follows on from History SA/Veterans SA’s successful travelling display Bravest of the Brave, launched in 2012 and telling the stories of the SA recipients of the Victoria Cross during the First World War.

Gallantry will continue to be displayed at the City Library until the end of this month, coinciding with Anzac Day on 25 April and the centenary of the beginning of the First World War this year.   The library has also organised a series of talks with the Military Historical Society of Australia (SA Branch) regarding both the history of the Victoria Cross and the 10th Battalion (flyer can be downloaded on right).

After April, the exhibition will be available for loan for free by community museums, libraries, history groups and RSL clubs throughout South Australia.  For more information, please call 08 8203 9888 or email

More photographs from the launch can be seen here 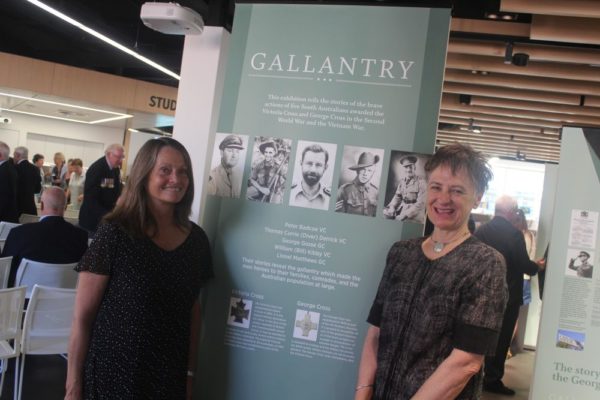