Recently I was tempted by the aroma of baking biscuits and some culinary history to attend another presentation by Allie Reynolds at Adelaide Farmers’ Market, at the Wayville Showgrounds. Timed perfectly for Anzac Day, it was a follow up to her first fascinating talk at the Market about her search for the first Anzac biscuit recipe in April last year.

Assisted by Fiona Roberts, Allie was able to talk and bake at the same time, describing her latest research but not giving away too many surprises so she can leave something for the book that is in progress.

First she updated us on the great coconut debate. Who put the coconut in the Anzac biscuit and when?  1924 seemed to be a possible turning point and certainly by the 1930s it was becoming a common ingredient, and fixed by the Second World War period. She also talked about other similar biscuits and their historical connections to the Anzac such as flapjacks in the UK and munchies in South Africa.

Allie came up with these simple but astute conclusions. The culinary icon that is the Anzac biscuit is both ordinary and extraordinary.  It is made by ordinary people using a simple recipe.  However it is also extraordinary because it is unique, unusual and uniting.  Unique because it is the only food icon that has come out of the vagaries of war.  Unusual because it is eaten all year but is also commemorative.   And uniting because?  Well, Allie cited two interesting examples.   Unlike the Pavlova it doesn’t divide us as Australians with our New Zealand neighbours over its origins.   Allie also quoted the marvellous example of the Baked Relief group of women in Brisbane who sent biscuits from the city to those struggling in the bush in Queensland.  A great culinary gesture of unity.

The Anzac biscuit, decided Allie, is ‘purposeful and positive’.  Not everyone can march, not everyone can join the RSL or wear medals. But we can all bake biscuits.

And with this said, we all shared the results of Allie’s baking, made from a pre-1920, coconut-less family recipe belonging to Carole Moore, from the Mount Lofty Districts Historical Society.   You too can download the recipe in the Resources section to the right. 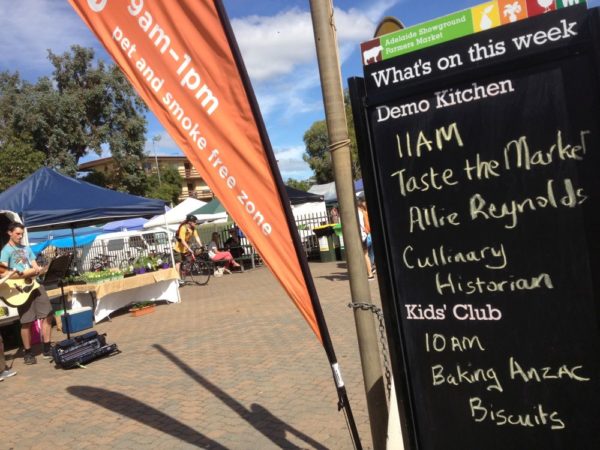