Chance meetings can sometimes take you down some interesting roads.  Early one morning this week, I was at the Torrens Parade Ground waving off 40 very excited former women soldiers with their family and friends as they headed down the Anzac Highway in a convoy of six historic vehicles from the National Military Vehicle Museum.  Both women and vehicles were of similar vintage but all seemed in fine form and good working order!  They were on their way to the book launch of West Australian Lyn Dale’s Lady Soldiers at the Army Museum at Keswick Barracks.  Back in May at a History Festival event, I had met Helen Meyer who was organising the launch and from this accidental encounter the convoy idea had grown.

The convoy was just the beginning of a special day of camaraderie and women’s history.  First up we stopped a while in a courtyard of some buildings within the barracks.  A moving service by Repat General Hospital chaplain Nora Kunzel was conducted beside a plaque commemorating where Lt Col May Douglas OBE had planted a tree in 1971 at the building’s official opening.  Up till now both the plaque and May Douglas had been largely forgotten and was not part of the Army Museum’s Heritage tour where other plaques – commemorating men – featured.  But it’s good to see that the Army Museum have now researched and collected a dossier of information about her.

Mary – known as May – Douglas (1904-1999) was born in Victor Harbor and during the Second World War was one of the first officers selected to join the newly formed Australian Women‘s Army Service (AWAS) and served as Commandant in South Australia for some months before going to Melbourne as chief instructor of the Army Women’s Officers’ school.  She was later Controller of the Australian Army Medical Women’s Service (AAMWS).  She also played an important part in the Girl Guide movement in South Australia from the 1920s, becoming State Commissioner of the SA Girl Guides in 1952. During the 1960s she was made an Honorary Colonel of the Women’s Royal Australian Army Corps (WRAAC).  Australia’s first woman War Artist, South Australian Norah Heysen, painted her portrait which is now at the Australian War Memorial.

The alluring smell of home baking met us as we entered the hall ready for the book launch. On further investigation I discovered Trudy and her team doing a sterling job producing batches of scones for the hungry hoards from the mobile military field kitchen outside.

Lyn Dale’s book Lady Soldiers which tells the experiences of 51 women who served in the Australian Army (WRAAC and/or RAANC) from the 1950s to the 1990s was launched by Lyn’s former colleague at Murdoch University, Dr Amanda Third, now Senior Lecturer in Cultural and Social Analysis at the University of Western Sydney.  We learnt that the book had developed from Lyn’s previous project, a documentary film about 16 of the women.  Lyn responded with a moving speech followed by book signing and time for chat.  Many women had travelled long distances for the reunion.  Four West Australians had even driven across the Nullarbor Plain to be there and by the morning’s end had raised over $400 for the National Military Vehicle Museum’s building fund as a thank you to the drivers of the convoy.

As I left the building there was just one more experience to make my day.  Here I was fortunate to meet Ruby, who is making South Australian history as well as doing a very worthwhile job.  One of only four in the state, she is part of the Dogs4Diggers team, accredited assistance dogs that are provided to Australian Defence Forces with Post Traumatic Distress Disorder, by RSL SA and the Royal Society for the Blind.  Better still, I am told it was originally a South Australian initiative.

Photos of the event can be seen here

The Channel Nine Adelaide news story can be viewed here 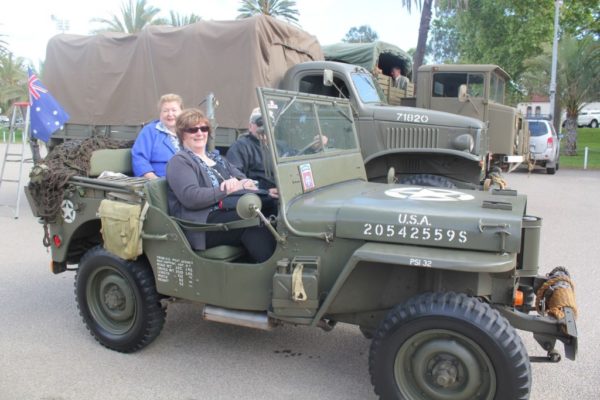