On Thursday 9 April, almost 200 people attended the official opening of the Women of the River Country exhibition at the Mannum Dock Museum of River History.

This new exhibition profiles 19 women of strength, passion and dedication and portrays how women from across the Murray Darling Basin have shaped the River Murray and its landscape from Wodonga to Goolwa.

Mannum Dock Museum of River History is one of History SA’s registered museums in their Community Museums Program and the exhibition, designed by Mulloway Studio and Natasha Adams, has been part funded by a History SA CMP 2014 grant. As well as additional support from the Mid Murray Council and the SA Government Office for Women, the project has also received a federal Visions of Australia grant from the Australia Council for the Arts and after being displayed at Mannum for the rest of this year will travel to other venues across SA, VIC and NSW.  In 2016 it will being going to Swan Reach, Blanchetown, Morgan and Echuca while Mildura and Goolwa are other venues on the cards.

Introduced by Mannum Dock Museum executive officer Debbie Alexander, the launch began with a traditional welcome to country by Nganguraku Custodian Isobelle Campbell as well as a smoking ceremony. There were official speeches by Mannum Dock Museum chairman Rob Bowring, Member for Elder Annabel Digance, who was representing the South Australian Premier, Mid Murray Mayor Dave Burgess and Jocelyn Brown, the daughter of Hilda Creaser who features in the exhibition.  Craig Pilkington and famed indigenous Australian musician Archie Roach played a number of songs in honour of Archie’s late partner Ruby Hunter who is also profiled in the exhibition. 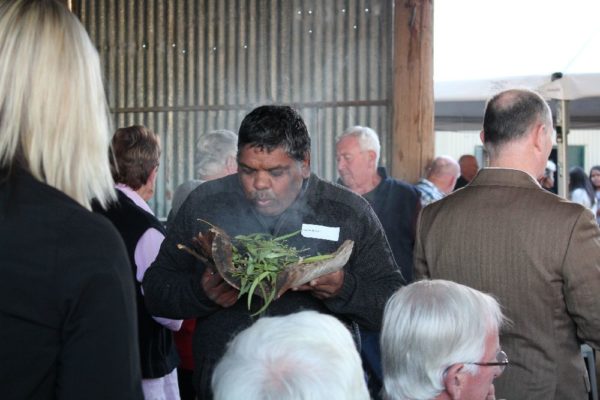