The National Railway Museum’s latest displays, South Australia’s Railways and the World War Years, were launched today by the Hon Susan Close, State Member for Port Adelaide.  Registered museum in History SA’s Community Museums Program (CMP), the museum received a 2013-14 CMP grant for the display which was developed by its Curator and Assistant Curator, Moana Colmer and Gabby Sexton, with assistance by community historian John Mannion.  It was also supported by funding from the Australian Government’s ANZAC Centenary Local Grants Program.

The launch began with a welcome by the museum’s Executive Officer, Bob Sampson and Chairman, John Kalaitzis in front of an audience of local government representatives including the Mayor of Port Adelaide Enfield, Gary Johanson as well as museum staff, volunteers and other supporters and those who have assisted with research for the display.  Afternoon tea in the museum’s 1947 Cafeteria Car followed the official proceedings.

The story of South Australia’s Railways and the World War Years is told through interpretive panels, photos and objects both small and large including four steam and one diesel electric locomotives, a railway carriage and a 1941 Chevrolet used by the Australian Army to visit and patrol near prisoner of war camps along the Commonwealth Railways Trans-Australian line.  The exhibits are displayed throughout the museum’s Fitch and Fluck Pavilions.

The display also features two First World War Rolls of Honour commemorating South Australian Railways staff as well as a new multimedia touch screen created by web developers Queensland-based Green Acorn on which visitors can search for the stories of the SA railwaymen who fought during the Great War.

In addition to this new permanent display, throughout November visitors will be able to see History SA’s travelling exhibition Bravest of the Brave which tells the story of eight South Australian men who were awarded the Victoria Cross for their heroic deeds during the First World War. One of the eight men was former SA railwayman Philip Davey of Semaphore who fought in Gallipoli and then the Western Front where he was awarded both the Military Medal and the Victoria Cross.  There is a memorial to him at the Adelaide Railway Station.

More photos from the launch and display can be seen here.

The National Railway Museum is open every day 10am-5pm. 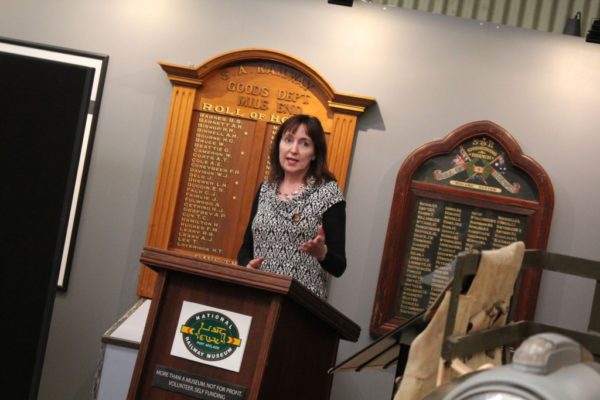