The framed certificate was presented by History SA’s new CEO Greg Mackie to the museum’s President Allan McInnes, whilst standing on the front of the museum’s latest exhibit, their historic diesel Loco 351 before His Excellency the Honourable Hieu Van Le AO Governor of South Australia and Mrs Lan Le, Mr Adrian Pederick MP, State Member for Hammond and Councillor Katherine Stanley-Murray, Deputy Mayor of the Alexandrina Council and a large gathering of locals and railway enthusiasts.

The world and his dog (actually several dogs) seemed to be present at the Port Milang Railway Museum for the event, gathering along the line in front of the old railway station on Daranda Terrace to not only welcome South Australia’s Governor to their small town of just over 500 people but to also celebrate the museum’s 25 years of development.

The sun shone on Loco 351 in its new orange livery which brightened up the skyline and backdrop of Milang’s holiday shacks alongside the shores of Lake Alexandrina.  Museum secretary Peter Lucas welcomed guests and introduced the two members of Milang School who did a great job telling the history of their town to the audience. Following the certificate handover, His Excellency the Hon Hieu Van Le addressed the guests also from the front of the train, reminding everyone that he was following in the footsteps of former Governor, Dame Roma Mitchell, who had performed the re-opening ceremony of the railway station as a museum in 1992.

However 25 years later, His Excellency had a different unveiling to perform.  Accompanied by Peter Lucas and Allan McInnes, he proceeded to the other end of the Loco 351 where he cut the ribbon across the cab’s steps to officially open South Australian Railways locomotive 351 and its driving simulator.

SAR Loco 351 was recently gifted to the Milang Railway Museum from the National Railway Museum in Port Adelaide and restored by Milang volunteers.  With the introduction of some simple but clever electronic gadgetry, it is now possible to ‘drive’ the loco using the simulator. Visitors can sit in the driver’s seat, appear to start up the train, sound the horn and drive the loco along the line, all without leaving the station!  Appropriate sound effects and a large computer monitor showing a film of the train moving in sync with the steering mechanism simulates the driving experience.

A tour of the museum and a delicious afternoon tea completed the successful afternoon proceedings.

History SA’s Community History Officers are currently working with Milang Railway Museum to complete their new Light Railway Centre, the interpretation of which is being part-funded by a Community Museums Program (CMP) grant. 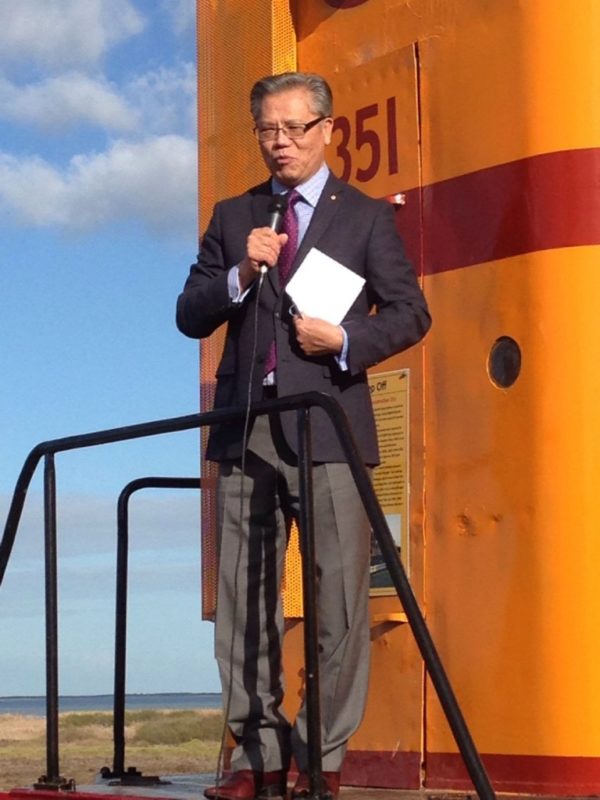