On Friday 30 November 2018, 67 railway enthusiasts, friends and relatives were transported to Milang from Mount Barker via Strathalbyn on historic railcars, to commemorate the closing of the Milang railway station which took place 50 years ago to the day in 1968.

Organised by the Milang Historic Railway Society in collaboration with SteamRanger Heritage Railway, this fundraising event for the Port Milang Historic Railway Museum began at the Mount Barker railway station where participants were presented with authentic vintage tickets before boarding an historic ‘Red Hen’ railcar.  On this glorious sunny day, passengers rattled along to Strathalbyn watching the passing scenery and listening to talks about the historic railway line along the way as well as having the opportunity to buy a special stamped anniversary envelope to be posted at Milang that afternoon. It was all change at Strathalbyn for a comfort stop plus a group photo at the ‘Change for Milang’ sign on the platform; then all aboard again on a ‘Barwell Bull’ railcar heading for Finniss with a stop at the now deserted Sandergrove Junction where passengers alighted to take photos and reminisce.

Coaches at Finniss then took everyone to Nurragi where they were treated to an informative talk about the Nurragi Conservation Reserve by Gerry Thompson. Then on to a delicious lunch at Milang Bowling club followed by a visit to the Milang Railway Museum and Light Railway Centre where volunteers enthusiastically showed off their work.  Milang Railway Museum is registered in the History Trust’s former standards Community Museums Program and has received grants and support in kind but much of their success is due to the efforts of the volunteer team.

At 3pm Allan McInnes played the part of the last stationmaster as he ceremoniously re-enacted the locking of the stationmaster’s office door as Ted Pattenden had done on 30 November 1968.  With that, participants then boarded the coaches again for a tour of Milang before heading for Finniss and taking the ‘Barwell Bull’ back to Strathalbyn Station.  Here they were allowed to witness the turning of the railcar on the historic turntable before taking the ‘Red Hen’ back to Mount Barker.

Here’s a short film which captures the highlights of this wonderful event, with its glorious weather and smooth organisation by a great team of passionate volunteers, headed by President Allan McInnes and Secretary Peter Lucas at the Milang Historic Railway Society. 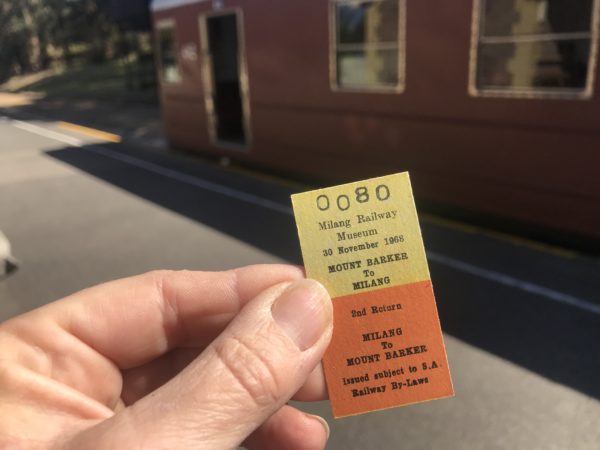