Who Gives a Root? is the engaging title of a new fun, informative and interactive exhibition about our humble leafy friends – trees – which opened at Unley Museum last Thursday 28th January. The launch party was held appropriately in the shade of a large tree on the village green at the back of the museum.

This new exhibition takes up the main display area in the centre of the building, once Unley’s old fire station.  It has been transformed into a forest setting with replica trees, soft green lighting and the sound of birdsong.  Information is innovatively communicated using overlays of printed paper on the walls (like photocopies – a clever reminder of the way sadly many trees end up these days). However, we are told that the entire exhibition is printed on Carbon Neutral Paper and utilises reused materials. You can learn fascinating facts such as one established tree can provide enough oxygen for ten people to breathe each year; as well as schemes such as Unley’s Tree Tag project, and  Trees for Life’s  Trees for Carbon project. Using the Eye Jack App, obtained by scanning a QR code, you can also search for 10 native Australian, tree-dwelling animals hidden around the room. There is also a large interactive table top touchscreen that enables visitors to find out about Unley’s significant trees.  Did you know that within the council area lives a River Red Gum on Wilberforce Walk, Forestville, believed to be the oldest living thing in South Australia! Estimated at 800 years of age, it is also one of the largest, with a circumference of seven metres. Before leaving, visitors can write thoughts or comments about the exhibition on ‘leaves’ to attach to a tree, while later joining in on a photo challenge, involving taking a selfie with your favourite tree and bringing the photo back to add to the wall.

Designed by Exhibition Studios, the exhibition was part-funded by the History Trust through their Museums and Collections (MaC) standards Program.  Unley Museum is one of eight Accredited Museums within this program.  Unley’s curator Karen Paris was assisted by researcher and self-confessed ‘tree hugger’ Marian McDuie, GIS lecturer at TAFE SA – Regional Urrbrae Campus, who was also the guest speaker at the launch.  As well as talking about the importance of trees, Marian also told us the fascinating origins of the phrase ‘tree hugger’, which dates back to an event involving several hundred Indian villagers in 1730. City of Unley’s Mayor, Michael Hewitson also gave an impassioned speech.  This council is serious about its trees. It has a Tree Strategy and in 2020, The Food and Agriculture Organization of the United Nations (FAO) and the Arbor Day Foundation recognised the City of Unley with Tree Cities of the World designation for the care and planning of urban trees and forests. This international program celebrates cities across all continents that meet core standards.

Delayed by almost a year because of COVID, the exhibition will remain open for the rest of 2021. It can be seen Monday to Wednesday 10am – 4pm, Thursday 10am – 6pm and Sunday 2-5pm. It is closed on Public Holidays. 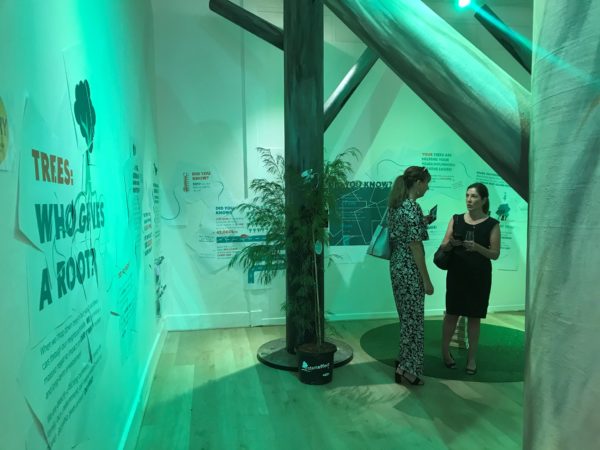