The Friedensberg Historic German School Museum is today located down an unsealed road, about 2 km from the pretty Barossa village of Springton (corner of Lablach and W Dewells Roads).  The small stone building is equipped as a typical old-fashioned one-room school of the late Victorian period.  Some of the original furniture and fittings are displayed such as wooden desks and benches with inkwells and slates, a blackboard, a British flag to salute and a map of the world showing the British Empire in pink.  There is an organ in the corner and the teacher’s desk at the front bearing the much-feared cane.

Displays of German school books, samples of written work and photographs of the period can be viewed at the back of the classroom. School and other groups can visit by appointment and actively take part in or have described the experience of being a pupil when it was used by the children of the early Prussian Lutheran pioneer settlers of the area from 1861-1917.

The school was built in 1861 on land and with money donated by wealthy businessman George Fife Angas (1789-1879).  Called Friedensberg or ‘Hill of Peace’, it operated as a school during the weekdays but on Sundays the furniture was rearranged for church services.  At the back of the building there was a Headmaster’s residence attached which today is home to a caretaker.   The residence has an interesting cellar that has been recently restored and will soon open to the public to demonstrate how food was kept cool in earlier times. Until 1876 all lessons at the school were held in German, but in that year a two-hour daily session taught in English was established by schoolmaster F.W. Baumann’s daughter Anna.  When St Johannes church was built in Springton in 1889, Friedensberg continued just as a school until 1913 when a new school with the same name was built nearer the church.  The school was closed in 1917 as a result of the hostilities towards the German people during World War I.  The building was restored with SA government assistance in the 1990s and reopened as a museum in 1995.

The Friedensberg Historic German Tour includes a visit first to the amazing Herbig Family Tree, a large hollow river red gum tree beside the road as one enters Springton.   Said to be around 400 years old, measuring almost 25m high and 7m in diameter, in 1858 it was the first Australian home of newlyweds Friedrich and Caroline Herbig and where they brought up the first two of their 16 children.  Following the school tour, visitors are taken down the hill to the small historic cemetery where one can see the last resting place of Friedrich and Caroline as well as the graves of other original Prussian settlers and their families.   The Friedensberg Historic German Tour is conducted by David Herbig, great grandson of Friedrich and Caroline Herbig and the author of the Herbig family and local history guide “Once There Was a Very Old Gum Tree”. 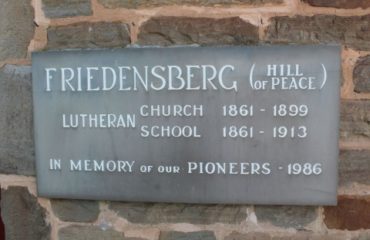 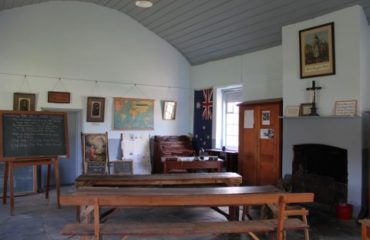 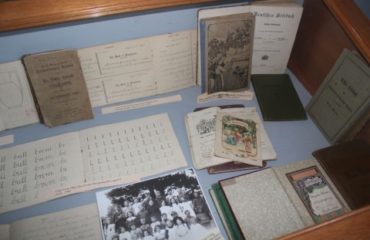 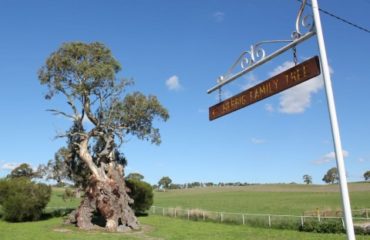 Take part in an authentic German schoolroom experience including saluting the flag, singing German songs, writing in pen and ink, even the cane! The Friedensberg Historic German Tour also includes the unique Herbig Tree and the heritage-listed Friedensberg cemetery with headstones in olde German script.