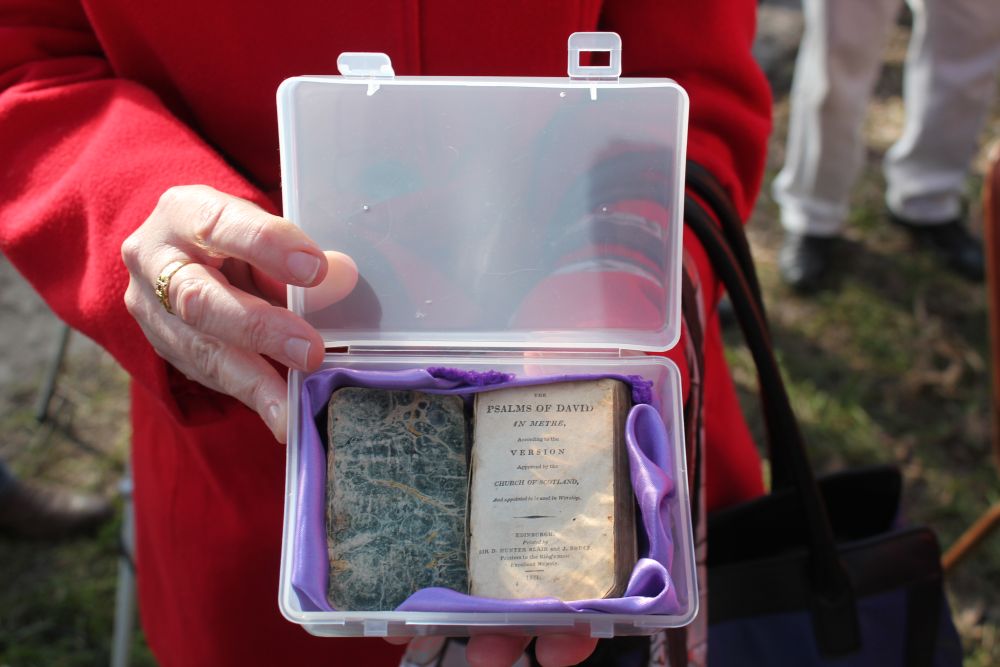 Recently I headed for the village of Prospect Hill in the Adelaide Hills, for a special plaque unveiling ceremony commemorating a unique historical event, near to the hearts of this small, close-knit community.

Sunday 25 August marked the 170th anniversary of the discovery of the remains of young Scottish migrant Sarah McHarg in the dense forest near Currency Creek; almost two years after the young woman had gone missing in 1841.  The mystery of her disappearance sparked much interest in the press at the time; despite full scale searches she could not be found. Had she been abducted, murdered?  The story continued to engage the imagination of locals over the years.  Her sad tale highlights a past era where lack of communication in isolated areas meant certain death.

On 3 June 1841, 24-year-old Sarah, who had migrated with her family from the parish of Inch, Wigtownshire in south west Scotland just two years previously, set off from Mr Burr’s survey camp to her father’s house about 3 km away in the Meadows. She was wearing a green and white cotton gown, with black velvet trimmed cape, a pink apron, and a straw bonnet.  With her she had two books: a novel and a small Book of Psalms.  When her remains were eventually found they were surrounded by a makeshift wurley of branches, although her bones had been pulled asunder by dingoes, and she could only be identified by remnants of her clothing and books.  Most poignantly, she had written with a pin in the book of Psalms “Dear Elizabeth (her younger sister), grieve not for me, I am resigned to my fate.” Sarah had apparently died of starvation, having wandered almost 25 km off course, completely lost and unable to communicate her whereabouts.

So on a crisp bright Sunday afternoon on the edge of bushland near where Sarah had set off on that fateful day 170 years ago, I joined a small group of locals, along with McHarg descendants, members of Flinders University Archaeology Department and Sue Ward from the State Library of South Australia.  We were welcomed by Greg Morrison, President of the Prospect Hill Community Association; while Ray Bailey recounted how this commemorative occasion had come about.  Former Prospect Hill student and Uniting Church pastor, Ben Usher gave further insight into Sarah’s story and read the touching ‘The Hour of My Departure’s Come’.  Accompanied by an accordion, we were all invited to sing ’Rock of Ages’ before Rev Usher said a prayer for Sarah.  The unveiling of the plaque was undertaken by Sarah’s great, great niece, Vida Chibnall with her daughter Lesley Rumbelow; and lastly Sarah’s little book of Psalms was formally handed over to Sue Ward, the State Library’s Coordinator of Archival Collection Development.  This moving ceremony over, we headed down the hill again into the warmth of the Community Hall for a bountiful afternoon tea of homemade scones and lamingtons; and time to reflect on our comparatively safe 21st century lives with the likes of 4WDs, mobile phones and GPS devices.

Sarah’s story is just one of many pioneering stories included in the Prospect Hill Historical Museum, located in the former general store of 1872 and a registered museum in History SA’s Community Museums Program.  It is also one of several personal tragedies of the area for Prospect Hill was hit hard by the Ash Wednesday bushfires of 1983, which is commemorated in a permanent exhibition at the museum.

More pictures from the Sarah McHarg ceremony can be found here 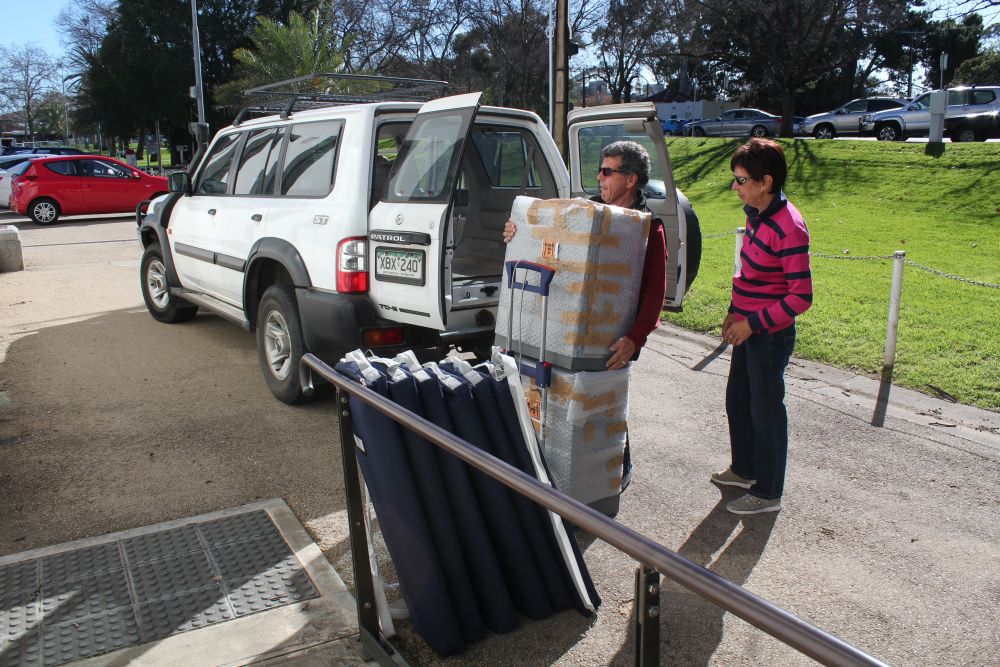 History SA/Veterans SA’s travelling exhibition Bravest of the Brave, which tells the moving stories of the eight South Australians awarded the Victoria Cross in the First World War, is now at Renmark Paringa Community & Civic Centre in the Riverland until 17 September. It is hosted by Renmark RSL and displayed in the Exhibition Room at the entrance to Renmark Paringa council building on 61 Eighteenth Street, Renmark.  We are grateful to Tony and Pat Guster for driving the 500 km round trip from the Riverland to collect the display as well as assistance from fellow Renmark RSL committee members, Chester Warren and Denis Coats with installation at the venue. We hope the Bravest of the Brave will receive many extra visitors on Federal Election Day, Saturday 7 September as it is located en route to the polling booths in the council building.

Renmark is the Bravest of the Brave’s9th venue. It is booked up to travel to a variety of venues in South Australia throughout the rest of 2013 and all of 2014.

The first of many projects that are being prepared worldwide to commemorate the centenary of the First World War in 2014-2018, Bravest of the Brave is available from History SA free of charge to travel to schools, RSL clubs, museums, libraries, aged-care facilities, community centres etc. There is also a schools resources kit.  Enquiries regarding the exhibition’s availability should be made on 08 8203 9888 or email for more information. Host organisations need to be able to collect and install the display themselves.  The display consists of 7 double-sided pull-up banners and 4 crates with framed replica medals. As you can see from the photographs here, it will fit into a ute or landcruiser-sized vehicle and is simple to install.

More photographs of the exhibition at Renmark can be seen here; while photographs of it at other venues including its launch by the Hon Jack Snelling MP in April 2012 are here 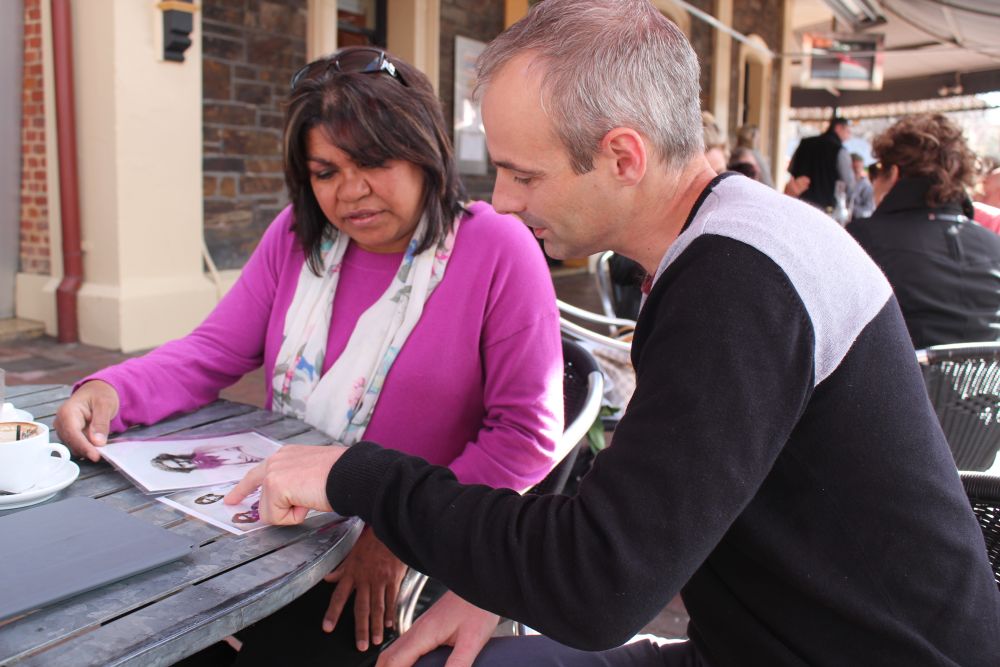 Last weekend, over a coffee and some welcome winter sun at the historic North Adelaide Lion Hotel, I took part in an informal repatriation of some of the earliest photographic images of named indigenous Australians.  Copies of two photographs that have been in a UK collection for well over a century, depicting James Wanganeen, formerly Wanganni, an Upper Murray Maraura man born around 1836, were presented to his great great granddaughter, Lynnette Wanganeen.  He was the first known ancestor of the Wanganeen family and I felt privileged to witness this emotional homecoming.  The prints were being returned from the University of Oxford’s Pitt Rivers Museum in the care of Curator of Photograph and Manuscript Collections, Dr Chris Morton who is currently on a whirlwind Australian study visit.  He noted that this event was ‘the highlight of his tour’.

For me, the moment was also significant in relation to the rediscovery I made of the mid-19th century daguerreotypes from Poonindie Mission at Mill Cottage in Port Lincoln in 2011, the story of which has been gradually unfolding via this website over the last 18 months.  One of the UK photographs, a head and shoulders portrait of James, described as ‘Wongannin, (aged 25), Catechist. S. Australia. 1867, had been central to the identification of one of the Mill Cottage daguerreotypes. When a group of experts examined the daguerreotypes in Adelaide in February 2012, consultant historian Tom Gara recognised one of them as James Wanganeen, because he remembered this identical image in the Oxford collection.  Within hours he located the relevant digitised document amongst his records and emailed it to me to compare, and suddenly part of the jigsaw was complete.  It’s what makes digitisation such a wonderful tool for speedy and efficient access when undertaking this kind of research.

This discovery was amazingly serendipitous as it soon transpired that an ARC-funded project Globalisation, Photography and Race: the Circulation and Return of Aboriginal Photographs in Europe, led by former Monash Associate Professor, Jane Lydon (now at UWA) was currently in progress and Dr Morton was researching Aboriginal visual histories in the Pitt Rivers Museum’s photograph collection.  Much international communication then ensued.  Jane has since identified three images of James Wanganeen; the one in Oxford, thought to be a print taken from a twin daguerreotype of the Port Lincoln example; a Duryea Carte de Visite of James and his wife Mary Jane amongst Mathew Hale’s papers in the University of Bristol library; and now the daguerreotype at Mill Cottage in Port Lincoln.  Jane has indicated that these three portraits collected by the Mission’s leaders expressed James’ ‘status within the community’.

Wanganni is believed to have left the Upper Murray area as a young boy after unrest in the community, and attended the Aboriginal school in Adelaide.  However, when this closed down in 1852 he was sent to Poonindie Mission which had been recently established by Archdeacon Mathew Hale as “a Christian village of South Australian Natives, reclaimed from barbarism, trained to the duties of social Christian life and walking in the fear of God”. Baptised in 1857 and taking the Christian name James, and the new anglicised surname Wanganeen, he was known to regularly read the lessons at church and travel further afield as an evangelist.

Lynnette is extremely proud of her heritage. Although she has known James’ story for some time (The Wanganeen Family Genealogy History was written in 1985 by her relative Doreen Kartinyeri), she has only recently seen James ‘face to face’ when she attended the launch of the newly preserved Mill Cottage daguerreotypes in May.   Now she and her extended family have access to all three of the known images of their ancestor; and we hope that the networks that have been set up as a result of these discoveries will unearth more information and identification of other indigenous images in both Australia and worldwide.

Chris is giving a public lecture about his research in Perth on Tuesday 27 August.