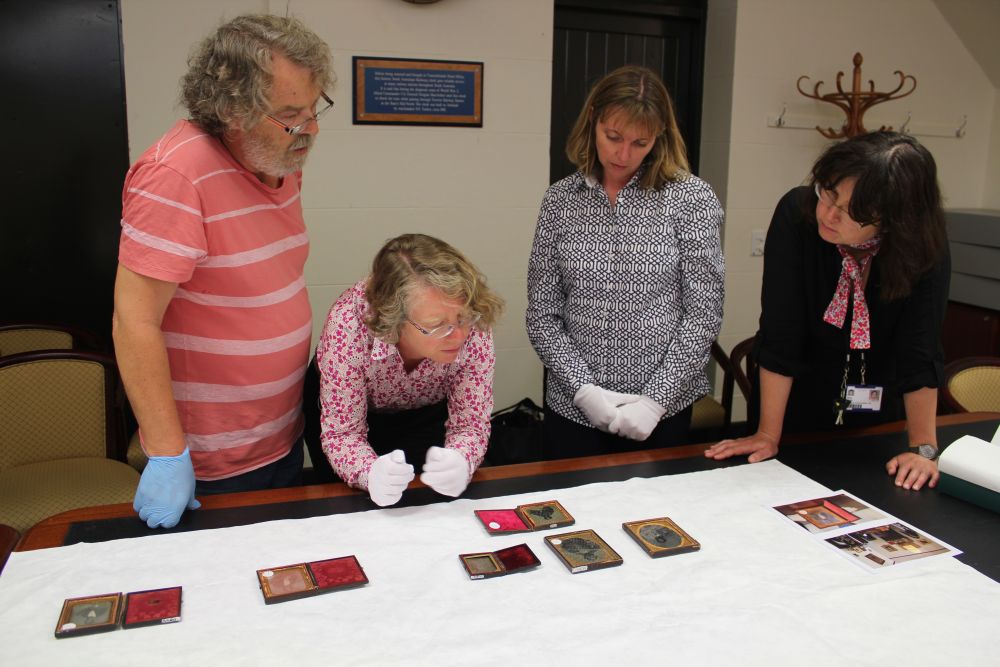 There’s been a buzz in this office since my visit to Mill Cottage in Port Lincoln before Christmas when I spotted those extraordinary early daguerreotypes of Aboriginal men from the nearby Poonindie Mission dressed as ‘gentlemen’.

Daguerreotypes, the earliest form of commercial photographs, were around for only a short period of time in the mid-19th century. They were made on silvered copper plates, and are easily recognisable. They not only resemble a mirrored surface but are also generally encased in glass with a hinged cover so protecting the very fragile surface.

This and the fact that they portrayed indigenous men from the Mission dressed in western clothes certainly got my attention and as soon as I returned to Adelaide consulted with my colleague, Senior Curator Mandy Paul.  She shared my excitement about the discovery and referred me to a similar daguerreotype of an Aboriginal woman in the Ayers House Museum collection, thought to be the earliest known photographic image of an indigenous person in South Australia.  The backdrop and design of the case seemed identical to one of the items at Port Lincoln.

We felt that their probable significance warranted some investigation as well as some advice regarding their future preservation.  So I contacted Jackie Johnston, secretary of the Southern Eyre Peninsula Local & Family History group who look after the collection to see whether she could bring over the 5 items to be evaluated by experts in Adelaide.

With permission from the City of Port Lincoln council who own the collection, Jackie brought the items to Adelaide in January which now amounted to 6 as another had been found in storage.  We had lined up consultant historian Tom Gara, and Julie Robinson Senior Curator and Maria Zagala, Assistant Curator of Prints, Drawings & Photographs from the Art Gallery of South Australia to inspect them.  We were also joined by Apryl Morden, Curator of the Ayers House Museum along with two volunteers Dorothy Woodley and Glenda Griffin who brought a number of daguerreotypes to compare.

The board room was bristling with excitement as each item was scrutinized.  It soon became clear that the collection was made up of 3 daguerreotypes and 3 ambrotypes (a slightly later form of photography on glass rather than a metal plate). But what we really wanted to know was the names behind the faces.  And why were they photographed?

Having a daguerreotype made was an expensive business, around a guinea a sitting – that was more than a week’s wages. After much rigorous discussion the items were packed up again and taken to Artlab to be assessed by Paper Conservator Liz Mayfield.

The next few days and weeks have upturned little pieces of the jigsaw and we are all in agreement that the collection needs some thorough research and careful preservation.  Currently we believe we have identified at least one of the portraits and can generally assume that the photographs were taken of some of the more prominent members of the Mission, ‘catechists’ or lay preachers. Like the two 1854 oil paintings of men at the Poonindie Mission by Crossland in the National Library of Australia, they were probably made to illustrate Archdeacon Mathew Hale’s vision for Poonindie, in Bishop Short’s words “a Christian village of South Australian Natives, reclaimed from barbarism, trained to the duties of social Christian life and walking in the fear of God.”

Superintendent of the Mission from 1856-1868 the Revd Octavius Hammond who took over from Hale, was the father-in-law of Joseph Bishop, the original owner of Mill Cottage.  Joseph had married Elizabeth Hammond and then after her untimely death, married her younger sister Ethelah, who had actually been born at Poonindie. This was probably why the photographs ended up amongst the Bishop memorabilia.

One of the most exciting discoveries was when Artlab took a record shot of the most damaged daguerreotype and enlarged the image.  From out of the faded image of the seated woman we could suddenly see the shape of a small child come into focus. Goosebumps all round!

This all goes to show that no doubt there are many significant historical items in the regions.  What do you have hiding in your collection?

You can see more photographs of Mill Cottage here 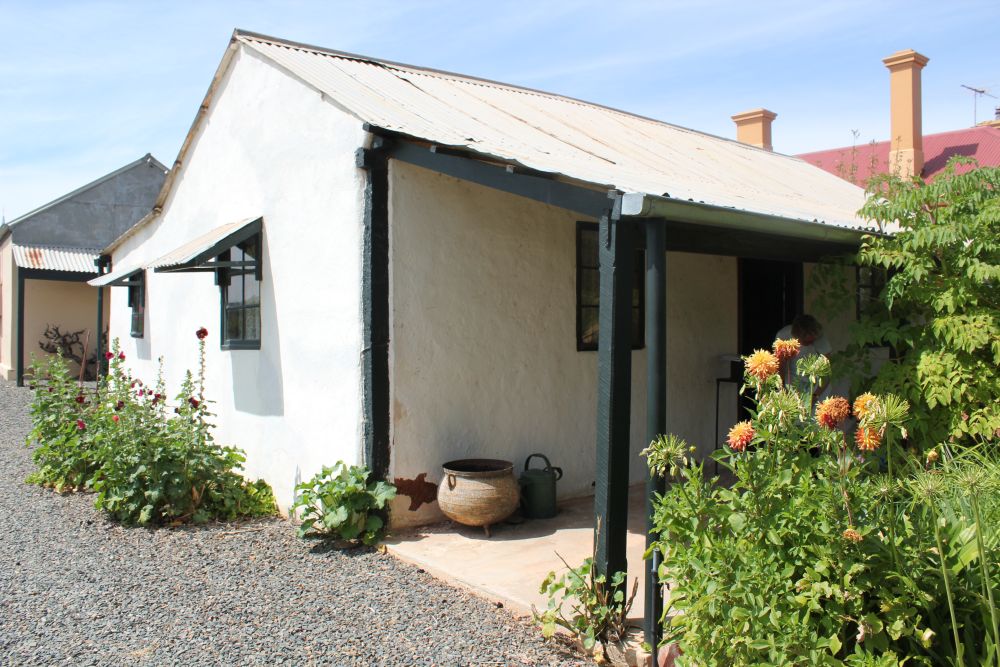 Amanda and Pauline spent a day in the Barossa this week, visiting Luhr’s Cottage at Light Pass and the Barossa Museum at Tanunda.  So much German Lutheran heritage in one day!

We’d been invited by the Luhr’s Cottage committee to come up and see the items they have displayed in the cottage and give some advice about how to preserve them.  The cottage was built in c.1847 largely of mud and straw and dust and damp has fairly easy access – a difficult environment for the many paper, textile, metal and leather items in the cottage.  The cottage is a bit of an eye-opener to 19th Century living conditions in a small and isolated community.  You can find out more about Luhr’s Cottage here.

It was great to see the Barossa Museum after not having been there for some years – displays changed around, a new store room and new undercover area for a select group of agricultural and transport items.  The museum is a rich resource of Barossa history from the many family photographs and personal effects from early German families in the area to the hundreds of German language books that the museum has collected over many years. 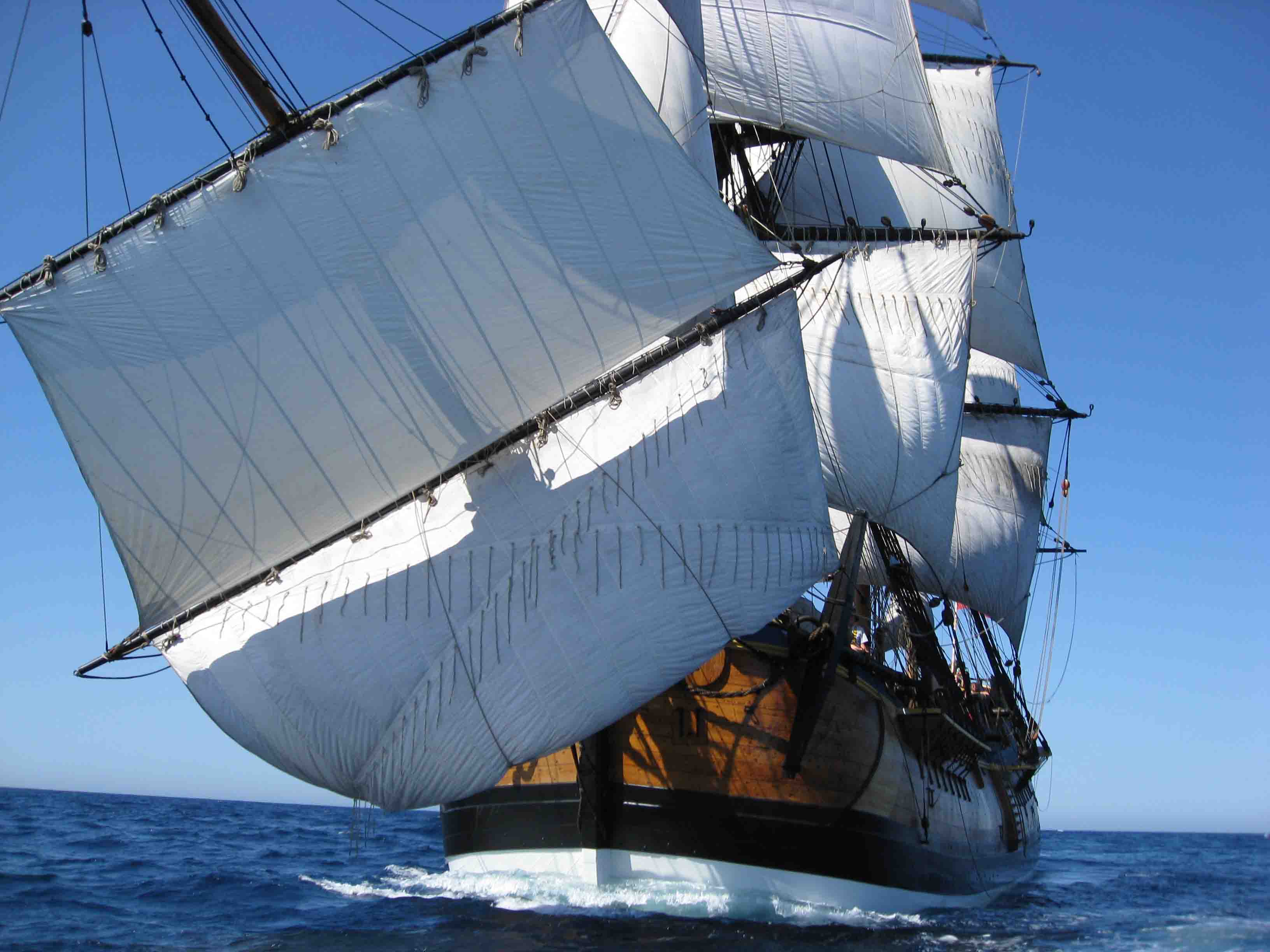 The full-scale replica of Captain Cook’s ship Endeavour operated by Sydney’s Australian National Maritime Museum arrived in Adelaide today.  The beautifully crafted square-rigger will be moored at Port Adelaide, Inner Harbour. It will be open for inspection from 16 to 23 February from 10am to 5pm (last entry 4pm).

Endeavour departed Sydney on 15 April 2011 for a historic 13 month circumnavigation of Australia opening in many regional ports along the way.  It was at the wharf in Port Lincoln last week from 4-8 February when an estimated 10,000 people crossed its threshold during its stay.

Cook’s Endeavour sailed into history when it circumnavigated the globe in 1768-71. Among other achievements, Cook explored and charted the east coast of Australia in 1770.

The magnificent replica, launched in Fremantle WA in 1993, is an 18th century tall ship with a difference… it has modern amenities (including twin engines) hidden away in the ‘cargo hold.’

When in port the vessel is presented as a ‘floating museum’, with visitors experiencing the ship as if Cook and his crew have just stepped ashore … charts lay on the table in the Great Cabin, a meal is half-eaten on the mess deck tables and bunks are ready for a night’s rest.

More information about the ship and the voyage is here