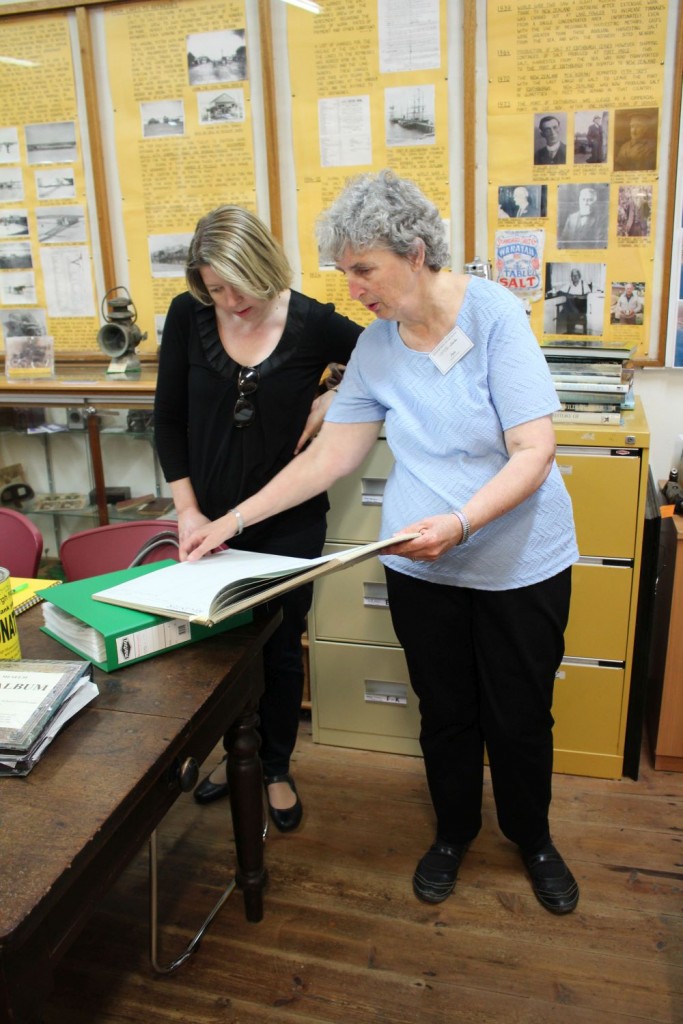 Last week Amanda and I clocked up over 600 km during a two and half day trip visiting seven community museums on the Yorke Peninsula.  These included those in the Copper Triangle, sometimes referred to ‘Australia’s Little Cornwall’, where many Cornish tin miners migrated in the late 19th century.

Starting at Kadina, we attended the launch of the Farm Shed Museum’s new Sowing the Seed display which had been part funded by a History SA CMP grant.  The following morning we headed down to the museum at Edithburgh. It was good to hear that the anchor from the ill-fated Clan Ranald is back in town after restoration and will be put on display outside the museum in January.  We also saw the new mural on the side of the building and their open air display of agricultural equipment.

Then it was on to Bublacowie via Yorketown to see Chris Soar’s military museum set in the grounds of the original 1912 school which is also Chris’s home.  This private collection of wartime memorabilia and local history is full of surprises, including some items from the Loveday Internment Camp.  We were fortunate that the grader had just been through so the unmade road was relatively smooth apart from having to avoid the stumpy tailed lizards that were out for a stroll!

In Stansbury we met with members of the museum committee to discuss their future plans. Stansbury is part of our Community Museums Program and it was good to see the progress of their new displays, funded by a CMP grant which included an interesting Hot water incubator and Honey extractor.

Tuesday saw us at Port Victoria Maritime Museum, also in our Community Museums Program and I wondered if it was one of the smallest maritime museums in the world; it is certainly one of the most windswept!  Housed in a corrugated iron building near the jetty, this was originally a flat pack storage shed brought out from England in the 1880s. Inside it is brimming with shipwreck stories and maritime history as well as an interesting ‘First Encounters display’ about the area’s first indigenous people with some great interactives.

Another old school building is Maitland museum and here we had morning tea in what we discovered was the classroom that former Prime Minister Bob Hawke spent three years as a small boy in the 1930s. We also saw a wonderful recent find, discovered at a garage sale – a sewing machine made expressly for one of Maitland’s well known stores.  Our final stop was Moonta museum, based in one of the first eight Model schools built in South Australia when compulsory education was introduced in 1878. In the process of working on a number of First World War projects, I became much excited by the discovery of many WWI fundraising badges as well as the story of 13-year-old Ross Perry and his 23 pairs of socks.

During the trip I kept the Twitterverse informed and entertained with news of our journey which resulted in not only making contact with Rhiannon from the Yorke Peninsula Times but also those further afield in ‘real’ Cornwall.

The trip was definitely splann* – as they say in Cornish!